Forged by the Sea, and Centuries of Devotion to the American People 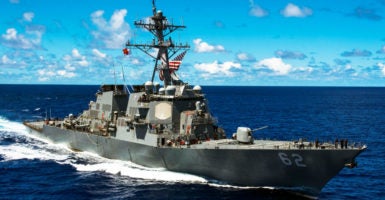 “The Navy has both a tradition and a future—and we look with pride and confidence in both directions.”—Adm. George Anderson, 1961

The Navy has evolved significantly from its colonial seafaring roots, but its spirit of service to the nation remains.

The colonial militia is most often mentioned in American history textbooks, but the Navy also had a rule in the struggle for our independence. The Founders debated the practicality of having a naval force at first because of the British Royal Navy’s domination of the seas. Fortunately for Americans and much of the future world, the Continental Navy proved its mettle and won the respect of General Washington as a partner to the Army.

The Navy then all but disappeared after the Revolutionary War. It took pirates off the North African coast, tensions with France, and war with Great Britain in the 18th and 19th centuries to highlight the necessity of the Navy.

Today, the seas are arguably more relevant to global commerce than ever. In fact, approximately 90% of all the world’s goods are shipped by seas. These economic lifelines are threatened every time a ship is hijacked by pirates in the Gulf of Aden, or when Iranian vessels interfere with shipping through the Strait of Hormuz.

A rising China and a resurgent Russia also are trying to tip the scales, shifting their resources to the Pacific Ocean and Arctic Circle. For example, China built airfields in the Spratly and Paracel islands, many in areas still disputed by neighboring countries.

Although the Navy abandoned “a global force for good” as a slogan, it continues to be one. It not only keeps the peace on the high seas, it airlifts in supplies and offers assistance from its hospital ships at times of flooding and natural disasters.

The United States enjoys a blanket of security that spans the entire globe, in part thanks to the efforts of American sailors who tirelessly patrol both the blue waters and the littorals.

From the Barbary Coast, to the Battle of Midway and beyond, the Navy will go to victory or to the rescue. Happy Birthday, U.S. Navy!