COVID-19 Policies Are Hurting Kids More Than Virus Itself 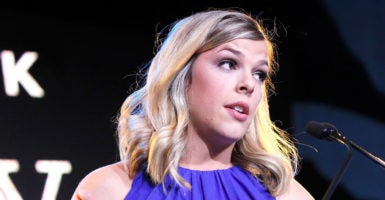 "This replacing of the God of Scripture with the god of self has to do with why young people lean to the left," millennial podcast host, blogger, and Fox News/Fox Business contributor Allie Beth Stuckey says at the Values Voter Summit. Pictured: Stuckey speaks Jan. 17 at Save the Storks' second annual Stork Charity Ball at Trump International Hotel in Washington. (Photo: Paul Morigi/ Stringer/Getty Images)

When people reject belief in God, Stuckey told the crowd at the Values Voter Summit, they usually embrace belief in government.

“I have never seen someone move to the left politically and become stronger theologically,” the host of the “Relatable” podcast said, as the crowd listened attentively.

Those who base their worldviews on self eventually make government more powerful and intrusive, Stuckey, 27, said.

After interviews with many fellow millennials as a podcast host, Stuckey said, she sees that the generation’s worldview leads to meaninglessness. If people believe only in themselves, they have nothing outside themselves to live for and no belief in a God who can reform the self, she said.

From this place of despair, millennials often hope that government will help them fix their problems.

“This replacing of the God of Scripture with the god of self has to do with why young people lean to the left,” Stuckey says. “If you don’t believe in a transcendent Creator who gave us inherent rights, you have to look to another authority to give you your rights, and that’s the government.”

Because of this worldview difference, conservatives need to talk about more than policies with millennials, she said. Without a foundation in a worldview that goes beyond the self, policies mean little.

“It’s like the parable of the man building his house on the sand. When the rains come, it’s just going to go tumbling down because you don’t have a firm foundation for your worldview,” she said, referencing a story Jesus tells in the New Testament.

When people change their worldviews, everything changes for them, she argued. This is why a worldview based on living for God is one that values freedom and changes people’s lives.

“That’s what we talk about on my podcast, that’s why it’s called ‘Relatable,’” she told the crowd. “Because it relates to people that are trying to build a coherent worldview on something other than themselves.”