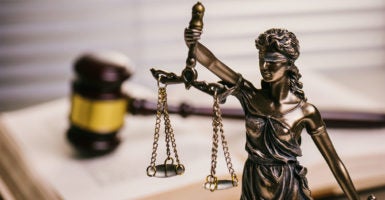 Congress should pay more attention to the need for, and adequacy of, mens rea standards when enacting criminal laws. (Photo: Getty Images)

In an opinion issued on Sept. 16, a majority of a three-judge panel of the Eighth Circuit Court of Appeals held that when a statute doesn’t say whether criminal intent is required to commit a crime, courts also should not assume strict liability—liability absent criminal intent—has been established unless the statute “indicates, either expressly or through implication,” that Congress intended to enact a strict liability offense.

The majority found this approach appropriate because, as the Supreme Court has previously warned, “to interpret the statute otherwise would be to criminalize a broad range of apparently innocent conduct.”

In 2010, Mast wanted to install drain tile on his property to drain water from specific areas of his land to prepare it for farming. Mast sought the approval of the Natural Resources Conservation Service, which informed him he had to coordinate with the Fish and Wildlife Service because the Fish and Wildlife Service had acquired an easement on his property from a previous owner nearly 40 years earlier.

The Fish and Wildlife Service sent Mast a map of the protected areas of his property, advised him that his current plan would violate the easement, and suggested alternate locations for drain tile installation.

But before Mast installed the tile, the Natural Resources Conservation Service sent him a new map that did not fully match the earlier one.

Mast abided by the more recent map and installed drain tile at a location permitted by the new map, but forbidden by the old map. The Fish and Wildlife Service was not happy that Mast ignored its older map and had him charged with the crime of knowingly violating its rules.

At his trial, the judge instructed the jury to consider not only the “knowing” violation, but also the lesser offense of “otherwise disturbing National Wildlife Refuge System [part of the Fish and Wildlife Service] property,” which “does not explicitly refer to any mental state.”

In reversing Mast’s conviction, the Eighth Circuit held that the mere lack of an explicit intent element did not necessarily mean that Congress meant to create a strict liability crime. Something more is required because strict liability crimes are contrary to the “universal” principle that “wrongdoing must be conscious to be criminal.”

In this case, the court concluded that “neither the statutory language nor the legislative history” of the act “indicate[d] an intent to dispense with a mental state requirement ….”  Although the statute itself did “not identify the precise mental state necessary to sustain a conviction,” the court discerned from the legislative history an intent to proscribe negligent violations, which would, in the court’s view, require proof that “Mast should have known that there was a substantial risk that his actions” would violate the law.

Judge Steven Colloton dissented on the grounds that it wasn’t appropriate for the court to write in an intent element when Congress didn’t include one.  He accused the majority of, essentially, usurping Congress’ role to rewrite a law.

Although the majority may have reached the right result as a matter of policy, Judge Colloton is correct that, as a matter of good jurisprudence, judges should not rewrite laws even if they’re bad laws.

One thing is clear, though; Congress should pay more attention to the need for, and adequacy of, mens rea standards when enacting criminal laws.  Congress should not depend on the courts to clean up its messes, and an unwary public should not be subject to the possibility that sloppy draftsmanship may result in someone being branded a criminal who had no intent to violate the law.