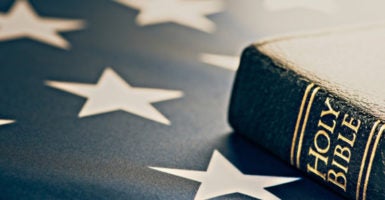 “There always will be a pending opportunity for you to stand for what God has said in his word," a retired Air Force colonel tells the Values Voter Summit in Washington. (Photo: Getty Images)

Air Force Col. Leland Bohannon, a combat veteran, was close to retirement when he entered an unexpected fight—one to preserve his two-decade military career.

“There always will be a pending opportunity for you to stand for what God has said in his word as the differences between where society is going and where God has always been become greater and greater,” the retired colonel said Oct. 11 during a panel on religious freedom at the Values Voter Summit in Washington.

In May 2017, Bohannon’s superiors tried to suspend him for not signing a “certificate of appreciation” for a same-sex spouse of a retiring service member under his command.

At the time, Bohannon had his own supervisor sign the certificate. He requested a formal religious exemption and consulted with both a command chaplain and staff judge advocate.

A year later, in April 2018, the Air Force Review Boards Agency determined that Bohannon had the constitutional right to exercise his religion and that he acted appropriately without discrimination.

Joined by others on the stage that had similar experiences and victories, Bohannon warned those in the audience to be faithful regardless of the outcome.

“If cases [were] lost and our efforts had failed, would we be bitter? How does that impact our witness and our continued witness to our neighbors, to the Americna public, and really to the world?” the retired colonel said, adding:

Will we continue with a spirit of generosity and outreach? Or will we turn inward and become bitter just because we didn’t get what we wanted?

Other panelists spoke about their own victories for religious freedom against attempts to interfere by federal and local governments.

When the federal government essentially tried to close his meatpacking plant in Michigan because he displayed an article with a Christian theme on a breakroom table, Don Vander Boon said, he was faced with a tough choice.

“That was part of the decision of whether to push back or not, the fear of loss, the fear of what’s going to happen,” Vander Boon, the owner of West Michigan Beef in Hudsonville, Michigan, said. “At a certain point, my wife, we sat down and I said, ‘Are we prepared to lose everything?’ It seemed like pretty much a hopeless cause.”

In 2015, U.S. Department of Agriculture inspectors threatened to cease conducting inspections of the plant, effectively putting Vander Boon out of business, unless he removed the religious tract that made a scripturally based argument against same-sex marriage.

The inspectors cited an expanded agency definition of “harassment” of USDA employees who inspect sites. Under laws regulating meat, a plant must be open to USDA inspectors in order to operate legally.

In 2017, under the new Trump administration, the Agriculture Department changed the policy to respect religious freedom. But, Vander Boon said, he didn’t realize this when he entered a risky fray.

“We decided it was bigger than us,” he said. “It’s something worth fighting for. People have fought and died for these freedoms. I’ve read so many stories and aspired to them, and here it is. It’s my turn. So, we hardly lost a thing. The Lord prospered our business through it.”

The Arizona Supreme Court ruled recently that the city of Phoenix cannot use a local nondiscrimination ordinance to force owners of an art studio to creating wedding invitations that violate their religious beliefs.

“Freedom won in Arizona,” Duka told the audience, to cheers.

“We received messages from people who said they disagreed maybe with our view of marriage, but said, ‘You are fighting for my freedom also and I stand with you,’” she added. “I am grateful for that.”

The annual Values Voter Summit, held Oct. 11-13 at the Omni Shoreham Hotel in Washington, was created in 2006 to help inform and mobilize Americans to preserve the “bedrock values” of religious liberty, the sanctity of life, traditional marriage, and limited government. Since its inception, the primary sponsor has been FRC Action, the lobbying arm of the Family Research Council.