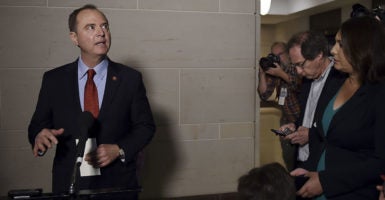 The impeachment drive by House Democrats appears to be focused on the July 25 telephone call between President Donald Trump and Ukrainian President Volodymyr Zelenskyy, which came to light through a whistleblower complaint.

That whistleblower complaint, and the circumstances surrounding its filing Aug. 12 with the Office of the Intelligence Community Inspector General, raise their own questions.

The relevant law, called the Intelligence Community Whistleblower Protection Act, details how “an employee of the intelligence community” may bring to Congress’ attention information about wrongdoing such as “violation of laws” or “abuse of authority.”

The complaint against Trump plainly acknowledges that these procedures apply to this whistleblower.

So what are the procedures? First, the law expressly prohibits a whistleblower from going directly to Congress without first submitting a complaint to the inspector general, currently State Department veteran Michael Atkinson.

The New York Times reported Oct. 2 that this whistleblower did exactly the opposite by first approaching a House Intelligence Committee staffer with “vague” accusations about the president.

According to the Times, the aide passed the information along to Intelligence Committee Chairman Adam Schiff, D-Calif., who then claimed to the press that his staff had not spoken to the whistleblower at all.

The importance of the law’s procedure is obvious. While it encourages well-intended intelligence community employees to bring to light information about wrongdoing, it also prevents rogue employees from inciting partisan attacks or causing serious damage.

These procedures are a check, a buffer to lessen that possibility.

Under the law’s procedures, the inspector general determines whether a complaint “appears credible.” The policy in place when this complaint was filed, for example, required that it be based on firsthand information. (We explore that issue here.)

A whistleblower also may inform a member of the congressional intelligence committees of the existence, but not the contents, of his complaint after once again submitting the complaint to the inspector general.

The law requires a whistleblower to comply with its disclosure procedures for complaints about matters of “urgent concern.”

If what the Times calls “vague” accusations brought to the House Intelligence Committee staffer did not rise to that, the whistleblower may not have broken the law, but he skirted its provisions very closely. At the very least, as the Times put it, the whistleblower’s actions show “how determined he was to make known his allegations.”

This is exactly why Congress enacted the Intelligence Community Whistleblower Protection Act, and why intelligence community employees are required to follow the law.