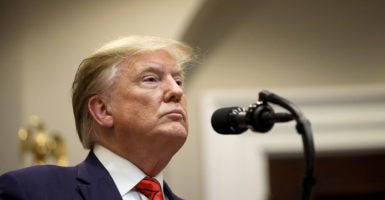 President Donald Trump listens to a question from a reporter at an event for the signing of two executive orders aimed at greater governmental transparency at the White House Oct. 9, 2019, in Washington, D.C. (Photo: Win McNamee/Getty Images)

Arkansas Sen. Tom Cotton accused Intelligence Community Inspector General Michael Atkinson of being “evasive” and “obstructive” during a closed-door hearing on Sept. 26 in which he refused to shed light on the potential political bias of a Trump whistleblower.

Atkinson refused to discuss what he meant in an Aug. 26 letter that said the whistleblower had an “indicia of an arguable political bias” in favor of one of President Donald Trump’s rival political candidates, according to Cotton.

Cotton argued that information regarding possible bias is “urgently relevant” to determining whether the complaint is part of a “well-coordinated partisan attack” aimed at impeaching Trump.

Mark Zaid, a lawyer for the whistleblower, said on Twitter after Cotton released his letter that the questions about the whistleblower’s alleged bias are intended to “detract from the substance of the complaint.”

In light of the ongoing efforts to mischaracterize whistleblower #1’s alleged “bias” in order to detract from the substance of the complaint, we will attempt to clarify some facts.

House Democrats are using the complaint to fuel an impeachment inquiry of Trump. The complaint centers on Trump’s July 25 phone call with Ukrainian President Volodymyr Zelenskyy.

Cotton asserted that Atkinson said in his interview that he was prohibited from sharing details of the whistleblower’s political bias with the Senate panel. But the Republican noted media reports indicating that Atkinson shared some of those details with the House Intelligence Committee during an interview on Oct. 4.

A source familiar with Atkinson’s interview confirmed the accuracy of the Examiner report to The Daily Caller News Foundation.

“I’m dissatisfied, to put it mildly, with your refusal to answer my questions, while more fully briefing the three-ring circus that the House Intelligence Committee has become,” Cotton wrote Atkinson.

Cotton asked Atskinson to provide more details about the whistleblower’s bias, including which candidate he might favor over Trump.

Zaid said his client has “never worked for or advised a political candidate, campaign, or party.”

“[O]ur client has spent their entire government career in apolitical, civil servant positions in the Executive Branch,” wrote Zaid, adding that “in these positions our client has come into contact with presidential candidates from both parties in their roles as elected officials—not as candidates.”