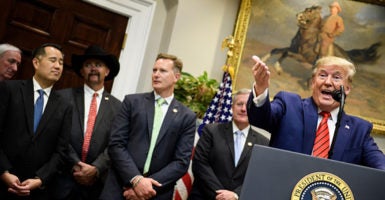 President Donald Trump speaks Wednesday in the Roosevelt Room of the White House during an event in which he signed executive orders designed to make federal regulations more transparent to Americans. (Photo: Brendan Smialowski/AFP/Getty Images)

Kevin Lunny and his family ran Drakes Bay Oyster Company for about 50 years on the Northern California coastline before the federal government shut down the business over regulations he wasn’t aware of.

“We produced nearly half of all the sustainable oysters in Northern California,” Lunny said Wednesday at the White House, before President Donald Trump signed two executive orders to prevent federal agencies from regulatory abuse.

“The National Park Service forced our oyster farm out of business,” Lunny said. “If that wasn’t enough for our family and our community, today the rest of agriculture, which includes another 24 ranchers and family farm businesses within the National Seashore, are facing the exact same process.”

In 2011, the Interior Department rejected a permit for the business to continue operation, despite action by Congress to grandfather protection for aquaculture companies in the Point Reyes Wilderness Act.

The agency argued in court that it had wide discretion to grant or deny permits.

Lunny’s battle to save the family’s oyster business ended in 2014, when the 9th U.S. Circuit Court of Appeals sided with the government.

One of Trump’s executive orders, titled “Bringing Guidance Out of the Darkness,” prohibits federal agencies from bypassing the cost-benefit analysis and avoiding public comment—both required when agencies adopt a regulation.

Another executive order, titled “Transparency and Fairness,” protects Americans from unlawful interpretations of existing regulations, or from unexpected penalties. Agencies would be required to proactively educate the public before imposing costly fines.

As Lunny began to walk away from the lectern, Trump asked: “Is the business gone now?”

“No American should ever face such persecution from their own government, except for the president,” Trump said. “Don’t feel bad, Kevin. They treated you better than they treat me.”

The president said the White House would monitor enforcement of the new orders.

“Americans will no longer be subject to the hidden games that are played on the public,” he said.

During the Obama administration, federal agencies imposed thousands of mandates through blog posts, letters, brochures, and thousands of other publications, according to the White House.

Also speaking at the event was Andy Johnson, a Wyoming rancher whom the Environmental Protection Agency threatened with a $16 million fine for trying to build a pond on his own property.

After the story made national news, the EPA settled, agreeing not to fine the rancher and allowing him to keep the pond without obtaining a permit.

Trump had noted the case in 2017 when he ordered the EPA to reform the Obama administration’s Waters of the United States regulation.

“Today we are making a major step forward in the effort to drain the swamp and to get our arms wrapped around the administrative state,” Russ Vought, acting director of the White House Office of Management and Budget, said at the event.

We can’t do that until we know all the dark, regulatory, stealth regulation that is out there. That is one of the reasons we are asking all of the agencies to put on their website, in a searchable way, all of these regulations so that we can understand what [the situation] is. Anything that is not put up there is rescinded. Secondly, we want to make sure the American people, families and small businesses, are not bullied by their government.

The Army Corps of Engineers determined in 2016 that permafrost covering about one-third of the state of Alaska met the definition of  “navigable waters,” which prevented the planned expansion of Tin Cup, LLC, a small, family-owned pipe fabrication business in Fairbanks, Alaska.

Tin Cup owner Richard Schok spoke about his situation, in which the Army Corps relied on the “Alaska Supplement” to the agency’s 1987 Wetlands Manual.

However, the supplemental material never was delivered to Congress as required by the Congressional Review Act. The pipe company argued in court that the rule was never in effect.

However, the 9th Circuit sided with the government and the Supreme Court this year declined to take the case.

“President Trump is achieving more on regulatory reform than many thought possible,” Anthony Campau, a visiting fellow in regulatory policy at The Heritage Foundation, said in a written statement.

Campau previously oversaw many Trump administration regulatory reforms as chief of staff for the Office of Information and Regulatory Affairs, a division of OMB.

“The president is demonstrating that regulatory reform in the Trump administration isn’t just about dollars and cents; it is also about securing liberty through the continued advancement of good government principles like fair notice, transparency, accountability, and decision-making grounded in analysis,” Campou added.