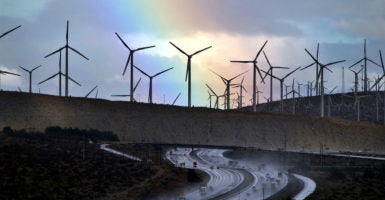 The Competitive Enterprise Institute has published a new paper, “Wrong Again: 50 Years of Failed Eco-pocalyptic Predictions.” Keep in mind that many of the grossly wrong environmentalist predictions were made by respected scientists and government officials. My question for you is: If you were around at the time, how many government restrictions and taxes would you have urged to avoid the predicted calamity?

As reported in The New York Times (Aug. 1969) Stanford University biologist Paul Ehrlich warned: “The trouble with almost all environmental problems is that by the time we have enough evidence to convince people, you’re dead. We must realize that unless we’re extremely lucky, everybody will disappear in a cloud of blue steam in 20 years.”

In 2000, David Viner, a senior research scientist at University of East Anglia’s climate research unit, predicted that in a few years winter snowfall would become “a very rare and exciting event. Children just aren’t going to know what snow is.”

In 2004, the U.S. Pentagon warned President George W. Bush that major European cities would be beneath rising seas. Britain will be plunged into a Siberian climate by 2020. In 2008, Al Gore predicted that the polar ice cap would be gone in a mere 10 years. A U.S. Department of Energy study led by the U.S. Navy predicted the Arctic Ocean would experience an ice-free summer by 2016.

In May 2014, French Foreign Minister Laurent Fabius declared during a joint appearance with Secretary of State John Kerry that “we have 500 days to avoid climate chaos.”

Demographers agree almost unanimously on the following grim timetable: by 1975 widespread famines will begin in India; these will spread by 1990 to include all of India, Pakistan, China and the Near East, Africa. By the year 2000, or conceivably sooner, South and Central America will exist under famine conditions. … By the year 2000, thirty years from now, the entire world, with the exception of Western Europe, North America, and Australia, will be in famine.

Ecologist Kenneth Watt’s 1970 prediction was, “If present trends continue, the world will be about four degrees colder for the global mean temperature in 1990, but eleven degrees colder in the year 2000.” He added, “This is about twice what it would take to put us into an ice age.”

Mark J. Perry, scholar at the American Enterprise Institute and professor of economics and finance at the University of Michigan’s Flint campus, cites 18 spectacularly wrong predictions made around the time of first Earth Day in 1970.

This time it’s not about weather. Harrison Brown, a scientist at the National Academy of Sciences, published a chart in Scientific American that looked at metal reserves and estimated that humanity would run out of copper shortly after 2000. Lead, zinc, tin, gold, and silver would be gone before 1990. Kenneth Watt said, “By the year 2000, if present trends continue, we will be using up crude oil at such a rate … that there won’t be any more crude oil.”

There were grossly wild predictions well before the first Earth Day, too. In 1939, the U.S. Department of the Interior predicted that American oil supplies would last for only another 13 years. In 1949, the secretary of the interior said the end of U.S. oil supplies was in sight.

Having learned nothing from its earlier erroneous energy claims, in 1974, the U.S. Geological Survey said that the U.S. had only a 10-year supply of natural gas. However, the U.S. Energy Information Administration estimated that as of Jan. 1, 2017, there were about 2,459 trillion cubic feet of dry natural gas in the United States. That’s enough to last us for nearly a century. The United States is the largest producer of natural gas worldwide.

Today’s wild predictions about climate doom are likely to be just as true as yesteryear’s. The major difference is today’s Americans are far more gullible and more likely to spend trillions fighting global warming. And the only result is that we’ll be much poorer and less free.