Game of Drones: Coming to a Military Theater Near You 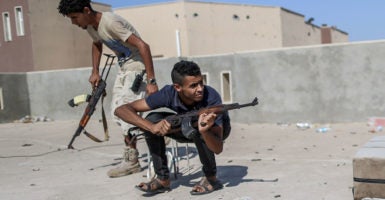 Fighters with Libya's U.N.-backed Government of National Accord take cover from enemy fire during clashes Aug. 24 with forces of the Libyan National Army led by Libyan strongman Khalifa Haftar, at the front line in al-Khalla. (Photo: Amru Salahuddien/Picture Alliance/Getty Images)

In light of the recent attack on Saudi Arabian oil facilities and oil fields, more people are paying attention to the use of armed drones, especially in the Middle East.

While the investigation into the strike at Abqaiq and Khurais continues, one thing is now clear: The threat of armed drones is not only an issue in that part of the world.

It has proliferated beyond the Middle East.

One such military theater that deserves attention is Libya, a North African country engaged in a civil war since 2014. Libya is now arguably the epicenter of a drone war between Khalifa Haftar, leader of the Libyan National Army, and the Government of National Accord, led by Prime Minister Fayez al-Sarraj.

Some have suggested that Libya today is “possibly the largest drone-war theatre in the world.”

At the core of the armed drone conflict in Libya are two outside powers, Turkey and the United Arab Emirates. In the growing absence of conventional air power, these two countries are outfitting their proxies with armed drones.

Once, it would have been unthinkable for rebel groups to have this sort of power projection—nor would it have been expected that both sides would be deploying armed drones in the same conflict.

Libya might be the only conflict that has state or non-state actors using armed drones simultaneously against the other side on a wide scale.

For its part, the UAE is equipping the Libyan National Army with Chinese Wing Loong unmanned combat aerial vehicles. These drones can launch precision air-to-ground weapons.

Al-Sarraj and the Government of National Accord have been supplied with Turkish Bayraktar unmanned aerial systems. Like the Wing Loong, the Bayraktar also can be armed with air-to-ground weapons.

Interestingly, the manner in which the Libyan National Army and Government of National Accord are employing these weapons is changing the conversation surrounding unmanned combat aerial vehicles.

The antagonists are arguably acknowledging the importance of armed drones to the conflict by striking a host of drone-related targets. Those targets include idle drones, drone command-and-control centers, and airports that support drone operations.

Demonstrating operational flexibility to the threat to their drone fleet, the Turks and the Government of National Accord have begun to use roads to launch and recover their unmanned combat aerial vehicles, rather than airfields, and dispersed the drone command-and-control elements to extend their range and protect them from enemy strikes.

It’s clear that armed drones and drone warfare is proliferating and evolving. That shouldn’t surprise us.

Armed drones are an ideal way for both state actors and non-state actors, including rebel and terrorist groups, to quickly, efficiently, and effectively establish an air power game—or up their air power game by adding drones to their arsenals of aircraft and missiles.

The advantages of unmanned combat aerial vehicles aren’t going unnoticed, especially to non-state actors that never could have dreamed of projecting air power.

Armed drones are here to stay as an element of military power. We can expect that unmanned combat aerial vehicles will only become more common on the battlefield—and more militarily capable over time, eroding long-standing U.S. armed drone superiority and increasing the threat U.S. forces face.

That being the case, it can’t be emphasized enough that now is an ideal time to take an in-depth look at the ongoing drone wars, whether it’s in Libya or elsewhere, with the purpose of developing and honing U.S. drone and counter-drone technology, tactics, and doctrine.