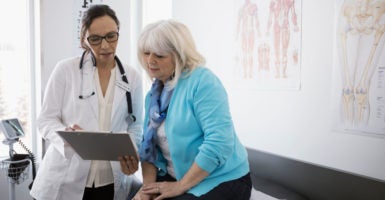 President Donald Trump is making an ambitious move to build on a string of regulatory relief actions that “protect and improve” Medicare, the federal health care program that serves approximately 60 million senior and disabled persons.

The president’s executive order, issued Thursday, is yet another step following a roadmap that’s leading to better choices and lower costs for Medicare recipients and helping taxpayers by reducing federal spending.  The order is primarily directed to the Health and Human Services Department, instructing the agency to undertake more administrative and regulatory measures to secure these policy goals.

Specifically, the president acted to provide Medicare beneficiaries with more “diverse and affordable” health plan choices in the Medicare Advantage program, Medicare’s system of competing private plans. Because of the order, health plans will have new regulatory flexibility to respond to customer demands for innovative benefit designs and to incorporate telehealth, which lets patients see their doctor using tools like internet video calls.

The order would also authorize several other changes improving the practice environment for doctors and helping seniors. The envisioned rule changes would also help relieve doctors and other medical professionals who are wrestling with growing paperwork burdens.

If finalized, the rule would additionally “reduce barriers” for seniors who wish to use “medical savings accounts,” and thus pay for medical care more easily.

Importantly, Section 3 of the order envisions a rule change in the provision of Medicare Advantage supplemental benefits that would “allow Medicare beneficiaries to share more directly in the savings of the program,” including “cash or monetary rebates” that would encourage seniors to seek and secure “high value” care.

Trump is building on a three-year record of success, particularly in stewardship of the Medicare Advantage program. His administration has promoted regulatory flexibility that has unleashed market forces in Medicare Advantage, which will secure better care and savings for seniors, as well as savings for taxpayers.

Because of the Trump administration’s 2018 regulatory changes, Medicare Advantage enrollees, particularly those who are suffering from debilitating chronic illnesses, have access to a much wider variety of supplemental health benefits, including transportation to doctors’ offices, caregiver support, and safety improvements in their home environment.

Medicare Advantage enrollees are also enjoying record increases in health plan choices and benefitting from intense market competition. For next year, the Centers for Medicare and Medicaid Services projects the number of patient choices at the county level will increase from 33 to 39 plans, representing a 49% increase in beneficiary choice since 2017 and the largest participation rate since 2009.

Meanwhile, seniors are experiencing significant declines in their Medicare Advantage premiums. This year’s average monthly premium is $26.87. Next year, it’s expected to be $23.

Altogether both the Medicare prescription drug program (Medicare Part D) and Medicare Advantage have generated a savings of approximately $2.5 billion in seniors’ premium costs. Better health benefits at lower cost for patients is the essence of value.

The administration is doing all in its power under existing law to improve Medicare for beneficiaries and taxpayers. Congress must build on what the president has begun and make further reforms.

Dark clouds are on the fiscal horizon. Medicare spending over the next decade, averaging nearly 8%, according to the Medicare trustees, is projected to outpace wages, general inflation, and the growth of the economy. It is also projected to grow faster than other health care spending and private health insurance.

The initial indicator of trouble is the deteriorating state of the traditional Medicare hospitalization program (Part A), which faces insolvency as early as 2026, meaning that the program will not be able to pay for all of its promised hospital benefits. To get the Medicare hospital program back into long-term fiscal balance, Congress will either have to impose a significant tax increase or resort to major benefit reductions.

The best path forward would build on the success of the president’s existing reforms.

Trump and Congress should work together and replicate this successful record on Medicare Advantage on a much broader scale. This would require a transition of all Medicare financing to defined contribution financing, similar to Medicare Advantage today, where the government makes a direct payment to the health plan of a senior’s choice. The traditional Medicare model, which is a defined benefit program instead of defined contribution system, is unsustainable in the long term.

Choice and competition works. By harnessing the free market forces of choice and competition, compelling traditional Medicare to compete head to head with Medicare Advantage and other private plans, the policymakers would be able to simultaneously slow the growth in Medicare spending, secure better care at lower cost for America’s seniors, and secure serious savings for America’s taxpayers. It’s the right thing to do.