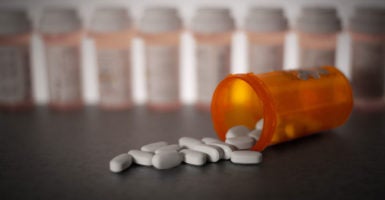 The Department of Energy’s National Laboratory in New Mexico misplaced or lost track of enough fentanyl four years ago to kill more than 1,000 people, according to a report in September from the DOE’s Inspector General.

DOE’s facility obtained 50 grams of fentanyl on Feb. 2, 2015, the report noted before stating that the amount was not added to the facility’s database for chemicals, ChemDB, until one week before the inspector general’s inspection in Feb. 6, 2017. The entry shows 5 grams of the deadly substance on hand and did not keep a record of the original 50 grams.

One researcher’s inventory indicated that as of May 7, 2015, only 48.5 grams were used for experiments out of the original 50 grams, while another measurement done a day later showed that only 45 grams were actually used in an experiment. The final measurement showed that 3.5 grams of fentanyl were unaccounted for, the report noted.

The oversight happened despite the researcher using an in-house policy for inventory count.

“We found that Los Alamos had not managed controlled substances in accordance with applicable Federal laws and regulations,” the inspector general report noted. “Specifically, we identified four personnel that previously or currently possessed DEA registrations, three of which allowed researchers to possess/use controlled substances.”

Fentanyl was found in more than 50% of 5,000 opioid overdose deaths in 10 states in 2016. A dose of 2 milligrams of fentanyl can kill a previously unexposed adult, meaning the loss or misuse of 3.5 grams of the substance due to an inventory error can potentially cause 1,750 deaths, federal research shows.

DOE’s Los Alamos facility drafted and approved an institutional policy in January 2019 for the management of controlled substances, the report notes. The new policy addresses “procurement, inventory management, and disposition of controlled substances, which includes additional levels of review and accountability,” according to the report, which notes that much of the problem was related to inadequate tools designed to hold such material.

“Although we can’t comment on specific registrants, DEA is committed to working with all registrants to help them understand their statutory responsibilities and ensure compliance with federal regulations,” Katherine Pfaff, a spokeswoman for the Drug Enforcement Agency, told The Daily Caller News Foundation. The DEA is responsible for regulating controlled substances.

The DOE has not responded to The Daily Caller News Foundation’s request for comment about whether officials have located the lost fentanyl.

U.S. officials say the bulk of the drug is pouring into the country through China and parts of South America. Media reports show President Donald Trump is considering an executive order to halt shipments of fentanyl, a move designed to apply pressure to China as the U.S. continues fighting the opioid crisis. Meanwhile, the problem continues apace.

An illegal alien was sentenced Sept. 10 to 74 months in federal prison and five years of supervised release for his intent to distribute 9 kilograms of heroin.

The man attempted to sell heroin to a confidential informant, and said they had 10 kilograms of the drug inside a compartment in their car. Shortly after being arrested, the substance was tested and found to not only contain 9 kilograms of heroin, but also included 1 kilogram of fentanyl.

The amount of fentanyl was enough to produce 500,000 fatal doses, according to the Justice Department.