Brother of Man Slain by Dallas Cop Offers Forgiveness to Her 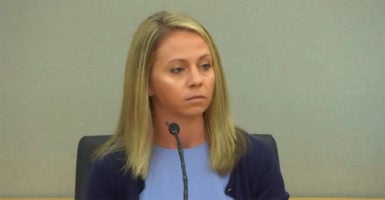 A man hugged and offered forgiveness to former police officer Amber Guyger after a Dallas jury sentenced her to 10 years in prison for killing his brother.

Guyger, 31, shot and killed her neighbor Botham Shem Jean, 27, in his Texas apartment while off duty in September 2018. She said she mistook him for an intruder in her own apartment. Guyger is white, Jean was black.

Jean’s brother, Brandt Jean, 18, took the stand Wednesday and told the former Dallas Police Department officer: “I don’t even want you to go to jail. I want the best for you, because I know that’s exactly what Botham would want.” He added, “I love you like anyone else,” before embracing her in a hug, The Dallas Morning News reported.

Botham Jean would have turned 28 on Sunday, according to Dallas News.

The jury found Guyger guilty Tuesday after deliberating for less than 24 hours based on the definition of manslaughter and the castle doctrine, which asserts a person reasonably can use deadly force to protect himself or herself at home, CNN reported.

“I don’t even want you to go to jail. I want the best for you, because I know that’s exactly what Botham would want.” https://t.co/sWaPUtS0kj pic.twitter.com/xPAIKQLh6z

After her conviction, prosecutors released text messages from Guyger making offensive statements, including jokes about civil rights activist Martin Luther King Jr.’s death and mocking statements about her black colleagues, The Washington Post reported. She had been facing between five and 99 years in prison.

In one exchange, Guyger’s friend warned her of a dog that “may be racist,” to which she replied, “It’s okay … I’m the same,” adding a minute later: “I hate everything and everyone but y’all.”

Guyger’s attorneys, however, said the texts represented only a “snapshot” of her life, the Post reported.

Guyger’s friends and family said she had dreamed of working in law enforcement ever since overcoming a childhood sexual assault.

“For her, that was all she ever wanted, all she ever dreamed of,” Dallas police Officer Cathy Odhiabo said, according to the Post.

Guyger’s 66-year-old mother, Karen Guyger, said her daughter wished to take Botham Jean’s place after he died and that she had called her crying so hard after the incident that her words were difficult to understand.

His father, Bertram Jean, said before the court that his late son “tried his best to live a good, honest life,” adding: “He loved God; he loved everyone. How could this have happened to him?”