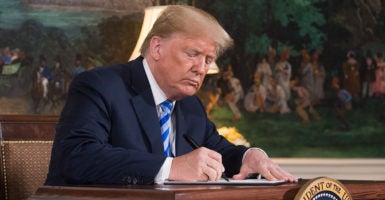 "In his heart, the president knows what to do with these adversaries: Hold out for the big deal," writes James Carafano. (Photo: Saul Loeb/AFP/Getty Images)

Voices are clamoring for President Donald Trump to make small nuclear deals with Iran and North Korea. All the arguments for doing so are bad.

For Trump, making a small, unserious deal goes against his gut instinct. If there’s one thing he has consistently demonstrated as president, it’s that he knows snake oil foreign policy when he sees it.

While the president may be right to be skeptical of all-or-nothing strategies that demand surrender or regime change or else, he is equally wise to be wary of Band-Aid diplomacy that’s likely to just bleed out in the end.

The calls for the president to grab small deals are proliferating faster than Korean boy bands.

Vox recently floated a claim that the U.S. would offer North Korea 36 months of sanctions relief in exchange for taking baby steps toward denuclearization. Iran recently said they would agree to talks—as long as Trump lifted sanctions first.

Suddenly, we’re hearing all kinds of bright ideas on how to jumpstart diplomacy with rogue nations. What these ideas all have in common is they require the U.S. to give a lot up-front in exchange for very little.

These are sucker deals. The multiple mini-deals with North Korea being floated, for example, are actually worse than real agreements adopted by previous administrations.

Here are the main problems with small-deal psychology.

1. Look who is for them: all the wrong people.

Most of the cheering has come from the arms control crowd. They cherish diplomatic process over real progress. They hate the administration and everything it stands for, and they’ll be the first to say Trump should be thrown under the bus when things don’t work out.

2. Look who they embolden: the other side.

Small deals take all the pressure off and only encourage the other side to think they’re unwinding our negotiating strategy. That emboldens them and weakens our position.

The president has had the guts to put the squeeze on Iran and North Korea, and look what he has accomplished. North Korea is at the negotiating. Even Iran publicly admits they could envision negotiating a better agreement than the Iran deal.

3. Look at what small deals get us: not very much.

At best, we get some symbolic or marginal commitments that don’t address the core national security concerns at play—the very concerns that got the president to put his power and prestige on the line to begin with.

Likely as well, there is zero political gain from small deals. Critics will dismiss a small nuke deal as just “wagging the dog,” an attempt to distract the public from the lack of progress being made.

It’s unlikely that small deals will improve the president’s popularity, either. Those that already like him will continue supporting him. Those that don’t, won’t. Others will look to bigger issues to decide which way they’ll lean.

The president has a reputation for only doing good deals. It would be unwise for him to risk squandering that reputation on small-ball proposals, particularly when they bring real security risks.

When the small deals inevitably fail—as they would with North Korea and Iran—our security would be worse off than when we’d started.

As the president knows, it’s a lot harder to mount a pressure campaign than to sustain one that’s already begun. Once he gives up pressure—when a deal fails—the president’s credibility will go with it.

In his heart, the president knows what to do with these adversaries: Hold out for the big deal.

We all know Trump isn’t going to start World War III with North Korea or Iran. He knows that’s not the right answer. But he also knows letting them off the hook would be a big mistake as well.

Not all the terms of a nuclear deal need to be met in a New York minute. There is room for phases within a timeline. But those phases need to be nailed down up-front, and the deal must be single and overarching. The other side must commit to terms that leave them with no nukes in the end, and agree up-front to full, complete, and verifiable declaration of their nuclear assets.

Sure, it might take more pressure and more time to get a comprehensive deal. How much time? As much as it takes, because good and sustainable national security solutions are worth waiting for.

Small deals are a sad excuse for a legacy.