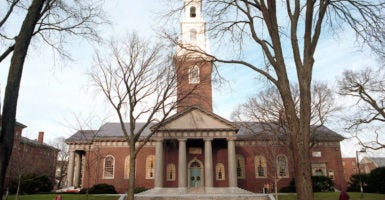 Harvard’s discriminatory program—which is hardly an outlier among Ivy League institutions—appears to be heading to the Supreme Court. (Photo: Darren McCollester/Staff/ Getty Images)

Mike Gonzalez, a senior fellow at The Heritage Foundation, is a widely experienced international correspondent, commentator, and editor who has reported from Asia, Europe, and Latin America. He served in the George W. Bush administration, first at the Securities and Exchange Commission and then at the State Department, and is the author of "A Race for the Future: How Conservatives Can Break the Liberal Monopoly on Hispanic Americans." Read his research.

The day that racial preferences are finally expunged from university admissions, hiring practices, and contracting, we should all pause and quietly remember U.S. District Court Judge Allison D. Burroughs.

By deciding that Harvard’s race-conscious admissions policies were not just constitutional, but also a necessary evil on the road to colorblind nirvana, she rendered useful service.

Wittingly or not, the judge has kicked the matter closer to the Supreme Court, where this heinous practice will eventually be ended.

Burroughs based her decision on the tired and self-contradictory argument that all we need to do to fight discrimination is put up with more and more years of state-sanctioned discrimination until we get to the point when we don’t need it anymore.

How long will Supreme Court justices hear this as the years go by until they realize that it would never end?

Burroughs reached that conclusion Oct. 1 in a U.S. district court in Boston. Harvard’s “holistic” admissions policy, she ruled, does not violate the Constitution by giving blacks and Hispanics what the university terms a “plus factor” advantage denied to Asian Americans and whites.

But Harvard does not “intentionally discriminate,” wrote the judge. Nor does it engage in impermissible racial balancing, she concluded, despite the fact that the admissions rate for Asian American applicants has stagnated at around 20% for many years.

The university, she wrote, is just pursuing a compelling interest in diversity, and “some racial categorizations are necessary to serve that interest … .”

“A race-conscious admissions program allows Harvard to achieve a level of robust diversity that would not otherwise be possible, at least at this time,” Burroughs wrote.

It was here that the judge began to wax poetic—literally, at one point quoting Toni Morrison. But her decision contained some lyricism of her own, rhapsodizing that, “at least for now, ensuring diversity at Harvard relies, in part, on race-conscious admissions. … The students who are admitted to Harvard … will have the opportunity to know and understand one another beyond race, as whole individuals with unique histories and experiences.”

She added: “It is this, at Harvard and elsewhere, that will move us, one day, to the point where we see that race is a fact, but not the defining fact and not the fact that tells us what is important, but we are not there yet.”

This “temporary solution,” however, has a long—albeit dubious—pedigree. In the 2003 Grutter v. Bollinger decision that reaffirmed racial preferences, Justice Sandra Day O’Connor suggested an expiration date: “It has been 25 years since Justice [Lewis] Powell first approved the use of race to further an interest in student-body diversity in the context of public higher education … . We expect that 25 years from now, the use of racial preferences will no longer be necessary to further the interest approved today.”

Interestingly, Burroughs sought to kick the can down the road even further by writing this week, “As time marches on and the effects of entrenched racism and unequal opportunity remain obvious, this goal might be optimistic and may need to change.”

O’Connor was referring to Regents of the University of California v. Bakke, a fractured 1978 decision, in which Powell wrote the controlling opinion. That decision gave colleges the green light to implement race-conscious admissions programs.

In a concurrence that provided a fifth vote, Justice Harry Blackmun wrote, “In order to get beyond racism, we must first take account of race. There is no other way. And in order to treat some persons equally, we must treat them differently. We cannot—we dare not—let the Equal Protection Clause perpetuate racial supremacy.”

Harvard’s discriminatory program—which is hardly an outlier among Ivy League institutions—appears to be heading to the Supreme Court. Perhaps when it reaches the justices, they will see the harm caused by decades of government-sanctioned discrimination and decide it is long overdue to bring an end to this odious practice.