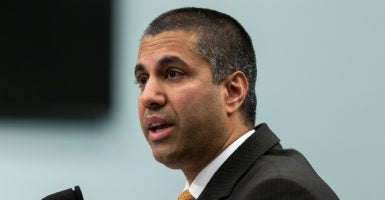 Since his appointment as chairman of the Federal Communications Commission, Ajit Pai has pursued a broad-ranging agenda for regulatory reform.

The centerpiece of that agenda was the repeal of the Obama-era “net neutrality” rules on broadband internet providers. The repeal was mostly upheld by the U.S. Court of Appeals for the D.C. Circuit on Tuesday.

But there’s more to Pai’s agenda than net neutrality. Among the other agenda items is reform of the FCC’s media ownership rules.

Last week, that latter effort hit a roadblock. Reforms the FCC had adopted were stymied when a three-judge panel of the U.S. 3rd Circuit Court of Appeals in Philadelphia threw out the FCC’s reform of those rules. The commission is now considering an appeal.

As Pai promised to do when he took over as commission chairman in March 2017, he and his Republican colleagues have taken a “weed whacker” to outdated, costly, and unnecessary FCC rules.

The most controversial among those were the net neutrality rules. The review of the media ownership landscape was a close second.

Those rules, some of which date back to the 1940s, restrict cross-ownership of radio and television stations and newspapers.

In November 2017, the FCC rolled back many of those media ownership rules. One of them, a 1975 limitation on cross-ownership of newspapers and radio or TV broadcast stations, was repealed completely.

Other rules were modified, such as the cap on owning two TV stations in the same market unless there were at least eight other media outlets in the same community. The FCC replaced that automatic ban with a case-by-case consideration.

The FCC’s rules were written for the media world of the mid-20th century, not that of today. From the invention of radio and television until the 1970s, broadcasting was characterized by limited competition and little diversity.

Only three commercial broadcast TV networks operated nationwide, and independent stations could be found only in the biggest of markets. One result was that viewers and listeners enjoyed little variety in programming.

In entertainment programming, all three commercial broadcast networks offered copycat programming: In the 1960s, for instance, they offered “The Addams Family” (ABC) vs. “The Munsters” (CBS); “Bewitched” (ABC) vs. “I Dream of Jeannie” (NBC); and “The Twilight Zone” (CBS) vs. “The Outer Limits” (ABC).

News and public affairs programming was similarly monotone. Each TV network featured a half-hour evening news show, with a reassuring anchor reporting news based upon what was in that morning’s New York Times.

Controversy was rarely aired on TV or radio broadcasts, thanks in part to the chill created by the Fairness Doctrine.

Today’s television landscape is radically different. Cable TV increased programming channels available to American households from half a dozen to hundreds, and satellite TV brought it into the thousands.

And today, internet-based content-streaming systems make nearly limitless content available to Americans without even having to get up from their couches.

At the same time, sources of news and information exploded as the “three wise men” system of evening newscasts was challenged by new cable news networks with 24-hour coverage.

Other platforms for news, such as online newspapers and social media—while not without problems of their own—provide Americans with literally unprecedented choice and diversity of news and opinion.

The vastly increased choice and competition have made the FCC ownership rules not only unnecessary, but harmful.

Rather than rely upon the tender mercies of a handful of news outlets, today’s media consumers can instead choose from a wide variety of sources. Rather than dominate the marketplace, broadcasters and (even more so) newspapers hold on, unsteadily, to a shrinking share of the business.

In this new world, the ownership limits imposed in the previous century are not needed to protect choice and diversity. Instead, they simply reduce the ability of the legacy media to survive at all.

Recognizing these changes in media, policymakers have struggled for 20 years to repeal or reform the FCC’s media ownership rules. The Telecommunications Act of 1996, in fact, established a process by which such outdated regulations could be repealed.

Under the act, the FCC was directed to review its rules biennially and eliminate those that are no longer needed.

The Sept. 23 decision by the 3rd Circuit Court of Appeals was the third in a history of court decisions blocking reform.

But the FCC and Pai are not yet ready to give up on necessary reform. The next step is to ask for a review of the decision by the full 3rd Circuit in an en banc hearing. Failing that, the FCC should appeal to the Supreme Court to step in.

In the meantime, the antiquated ownership restrictions in place from a long-gone era will continue. As a result, newspapers and many broadcasters will become even less competitive, unable to keep up with the new media world.

Perhaps that’s the inevitable result, with or without a push from government regulation. But the decision should be made by consumers, viewers, and listeners in the marketplace, not by regulators enforcing the rules of the previous century.