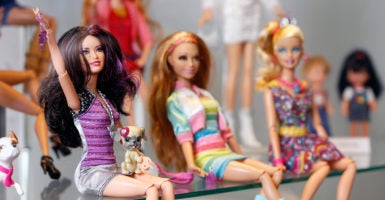 Fox Business Network reported some news last week that may surprise business strategists as well as kids and parents alike: Toymaker Mattel has announced a new line of gender-neutral dolls.

So, for $30, children will now be able to outfit dolls with long or short hair, clothing that includes pants, skirts, or both—whatever the kids decide. The dolls are also available in six skin tones.

“Toys are a reflection of culture and as the world continues to celebrate the positive impact of inclusivity, we felt it was time to create a doll line free of labels,” explained the company’s senior vice president, Kim Culmone.

“This line allows all kids to express themselves freely, which is why it resonates so strongly with them. We’re hopeful Creatable World will encourage people to think more broadly about how all kids can benefit from doll play.”

It’s hard to know what to find more shocking: that Mattel has created a “gender-neutral doll,” or that the market—primarily made up of kids—is supposedly demanding one.

Somehow, it’s difficult to believe that young kids who don’t yet know the meaning of “gender neutral” would be demanding a gender-neutral doll.

A much more likely possibility is that Mattel is caving to progressive political forces that want “gender-neutral dolls.” In that respect, the new line of dolls tells us more about the politics of the present moment than the desires of kids.

Some might push back and say, “Calm down, they’re just dolls. Dolls aren’t meant to imitate real life.” And that’s true, to an extent.

Many toys are unrealistic—consider Batman, Spider-Man, Paw Patrol figures, and others. But the companies that manufacture those toys don’t pretend they are mimicking reality. They aren’t. They’re based on fiction and intended to ignite imaginative play, an important part of a healthy childhood.

But dress-up dolls are much more realistic than action figures, and they have often been used to promote gender stereotypes—for better or for worse.

With these gender-neutral dolls, Mattel is deconstructing the notion of sex in the minds of young children and teaching them an ideology that says there is no relationship between biological sex and reality.

This same radical gender ideology has proved disastrous when taken to its ultimate conclusion: pushing young people down the path of sex-reassignment with life-altering drugs and harmful surgeries

This ideology claims that since gender is simply a social construct with no basis in biological reality, it can therefore be fluid—hence the term “gender fluid.” However, a study published in 2017 in the Infant and Child Development journal suggests there is a biological basis for human behavior.

The study observed 1,600 boys and girls at play and found that when offered a variety of toys to choose from, under various conditions, boys and girls consistently preferred toys typed to their own sex, indicating biology’s persistent role in behavior.

Of course, kids shouldn’t be forced to conform to rigid sex stereotypes that dictate, for instance, that girls can’t play with trucks and boys shouldn’t play with dolls.

But it is a huge mistake to treat our sexed bodies as secondary to a subjective self-perception of gender. That is misleading at best, and damaging at worst.

The truth is that there are only two sexes, and toy companies should not mislead children to believe otherwise.

Gender dysphoria is a real condition, but the transgender community’s recommendations for medical treatment have been shown to be not only ineffective at resolving a person’s underlying distress, but actually harmful—especially to children.

Studies show this isn’t a safe process. Brand new data from the Food and Drug Administration shows that over 6,000 adults have died from the effects of a drug that is being used to block puberty in children who struggle to feel comfortable with their sexed bodies.

Progressive gender ideology isn’t helping Americans; it’s hurting them. It is not only nonsensical, but irresponsible for Mattel to create a line of gender-neutral dolls aimed at indoctrinating kids with this harmful ideology.