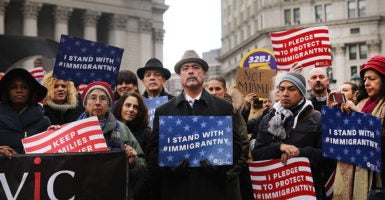 The move by the city’s Commission on Human Rights is expected to face a quick court challenge based on the First Amendment. Pictured: In January 2017, protesters rally in New York City against President Donald Trump’s policies to enforce immigration law and increase national security. (Photo: Spencer Platt/Getty Images)

Those who use the term “illegal alien” in New York City will be hit with a fine as high as $250,000, the city’s human rights panel has determined.

The move by the city’s Commission on Human Rights, its latest attempt to fight discrimination against illegal immigrants, is expected to face a quick court challenge based on the First Amendment.

U.S. law long has used the term “illegal alien” to refer to anyone not lawfully present in the country.

The duties of the Commission on Human Rights include combating discrimination in New York City by protecting employees from harassment and other forms of abuse based on such characteristics as race, gender, disability, and immigration status.

But its latest move seems ready to spark a confrontation over free speech.

“This is a fundamental violation of the First Amendment,” Hans von Spakovsky, senior legal fellow at The Heritage Foundation’s Meese Center for Legal and Judicial Studies, told The Daily Signal. “It is also bizarre that the city of New York believes it can punish someone for using the words ‘illegal alien’ when that is the correct legal terminology used in federal immigration statutes and federal court decisions, including by the U.S. Supreme Court.”

In legal guidance published in September, the human rights panel announced that “use of the term ‘illegal alien,’ among others, when used with intent to demean, humiliate, or harass a person, is illegal under the law.”

The 12-member commission, appointed by the mayor to unsalaried positions, enforces the city’s human rights law covering the workplace, housing, and public accommodations.

Although the commission’s decision won’t affect all aspects of public speech, the unelected officials are taking anti-discrimination measures to a new level without clear legal authority, critics say.

“The severity or pervasiveness of the harassment is only relevant to damages,” the commission’s guidance report says. “Even an employer’s single comment made in circumstances where that comment would signal discriminatory views about one’s immigration status or national origin may be enough to constitute harassment.”

Anti-discrimination laws that place limits on the free speech rights of employers and landlords have been upheld by courts, but a high bar typically exists.

Many experts criticize the commission’s action as unconstitutional, an argument strengthened by the fact that New York City bypassed local elected lawmakers.

Kim R. Holmes, executive vice president of The Heritage Foundation, has argued that a direct threat of violence must exist as a prerequisite to limiting speech.

“It is ludicrous to argue that saying offensive words alone or simply disagreeing with someone in an argument shows criminal intent,” Holmes wrote. “Even in cases where maliciousness was clearly involved … the Supreme Court has ruled that freedom of speech trumps offensive speech when no physical harm is intended.”

Von Spakovsky put it slightly differently in an email to The Daily Signal.

“It is political correctness taken to such an extreme that it violates basic constitutional rights—the Big Brother of ‘1984’ has arrived in New York,” he said.