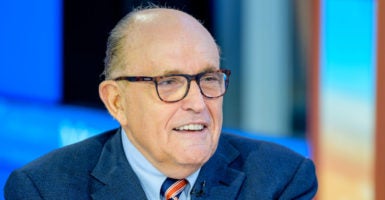 House Democrats’ inquiry “includes an investigation of credible allegations that [Giuliani] acted as an agent of the President in a scheme to advance his personal political interests by abusing the power of the Office of the President,” Reps. Elijah Cummings of Maryland, Adam Schiff of California, and Eliot Engel of New York wrote in a letter Monday to Giuliani.

They asked Giuliani, Trump’s personal lawyer, to produce documents related to their request by Oct. 15. The move comes one day after Giuliani told ABC that he would not cooperate with with Schiff, chairman of the House Intelligence Committee.

Cummings, Schiff, and Engel are investigating whether Trump attempted to push Ukraine into probing former Vice President Joe Biden’s son, Hunter, who sat on the board of a Ukrainian energy company while his father was in the White House.

Giuliani alleges that Joe Biden worked to remove a Ukrainian prosecutor who was investigating the company with which Hunter Biden was affiliated.

The whistleblower complaint that spurred the impeachment inquiry alleges the Trump administration attempted to cover up records of a July 25 phone call Trump had with Ukrainian President Volodymyr Zelenskyy in which he asked Zelenskyy to “look into” the Biden matter.

The White House referred The Daily Caller News Foundation to Giuliani’s office for comment. Giuliani did not return a request for comment in time for publication.