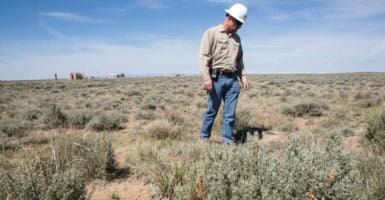 Paul Ulrich, director of Jonah Energy, which extracts oil by the fracking method, examines a reclaimed sage brush area outside Pinedale, Wyoming, on May 4, 2018. The U.S. government regulates use of the land, which is home not only to ranchers but to wildlife such as the sage grouse, mule deer, and pronghorn antelope. (Photo: Melanie Stetson Freeman/The Christian Science Monitor/Getty Images)

Local conservation efforts, not U.S. government regulations, boosted the population of a bird species in Colorado, one lawmaker said during a roundtable discussion on Capitol Hill focused on practical reforms to the Endangered Species Act.

Other House members who belong to the Congressional Western Caucus, along with “industry stakeholders” and policy analysts, described how the federal government’s designation of “critical habitat” often undermines conservation.

They also expressed concern about how environmental litigation violates property rights while failing to protect wildlife.

The Sept. 24 roundtable, involving 15 lawmakers and 27 business leaders meeting in the Senate Visitors Center, suggested broad agreement on the need to reform the Endangered Species Act of 1973.

The law has resulted in a recovery rate of only 3% for the wildlife it was designed to protect, according to the Congressional Western Caucus, which counts 72 members of both parties from 32 states and territories.

Rep. Scott Tipton, R-Colo., vice chairman of the Western Caucus, emphasized that localities and states need to have more latitude to pursue their own conservation efforts without federal intrusion.

Tipton pointed to efforts in Colorado to preserve the sage grouse, a chicken-like bird species, as an example of successful wildlife protection done locally. He said his state’s pilot program involving ranchers and farmers helped to rehabilitate the species.

“We were seeing the sage grouse numbers go up and growing,” Tipton said. “This ought to be our goal, not [to] have them listed [as endangered] in perpetuity.”

Tipton and other lawmakers present took the opportunity to roll out a draft package of bills designed to “modernize” the Endangered Species Act.

Tipton already has introduced a bill (HR 6344) to encourage voluntary conservation efforts at the local level.

Ben Goldey, communications director for Rep. Paul Gosar, R-Ariz., chairman of the Western Caucus, told The Daily Signal that the caucus is still in the process of building support from “stakeholders” and potential co-sponsors of the new bills.

Once the bills are introduced formally, the caucus will press for hearings and votes, Goldey said.

Rep. Ken Calvert, R-Calif., appeared to speak for many participants when he told fellow Western Caucus members that “we need to get the Endangered Species Act out of the courtroom and empower the agencies administering the law to follow the science and do their jobs.”

The California Republican also said “powerful special interests are invested in the status quo,” but the status quo “is not working for people or for listed species.”

Calvert sponsored a bill (HR 548) that would consolidate management and regulation of the Endangered Species Act within the Fish and Wildlife Service. Currently, that agency, part of the Interior Department, shares responsibility with the National Marine Fisheries Service, part of the Commerce Department.

The draft package of legislation includes 18 other related bills.

The problems with the Endangered Species Act flow not just from its language but its implementation, Daren Bakst, a senior research fellow with The Heritage Foundation, said during his presentation.

In 2012, the U.S. Fish and Wildlife Service found that 1,500 acres in Louisiana should be designated as critical habitat for a species known as the dusky gopher frog, Bakst said, citing one example.

Just one problem, he said: The frog had not been seen in Louisiana for more than 50 years. But because of the “critical habitat” designation, the federal government sought to impose a ban on development that would deprive property owners of more than $30 million in value, the Heritage policy analyst told attendees.

“So, what was the point of this effort?” Bakst asked. “It didn’t serve the interests of the dusky gopher frog, but there are plenty of losers in this effort, including the property owners plus other threatened and endangered species.”

Other listed species lost out, he said, because resources that could have been allocated elsewhere were diverted to an area where the species in question wasn’t even present.

The example of the dusky gopher frog highlights what Bakst described as “two central problems” with the Endangered Species Act.

“One, the Endangered Species Act doesn’t focus resources where they can be most effective,” he said. “And, two, the law attacks property owners, when the best approach would be to recognize that property owners are integral to preserving species.”

Karen Budd-Falen, the Interior Department’s deputy solicitor for fish, wildlife, and parks, briefed other roundtable participants about the Trump administration’s efforts to reform the law.

“While the administration is committed to protecting threatened or endangered species, that should not be an excuse to hold up a project, to hold up decisions, to hold up ideas, and to hold up things that may actually help species,” Budd-Falen said. “So, we are trying to have specific time frames and keep activities to those time frames. The Department of Interior is not yet done with regulatory changes.”

In August, the Trump administration rolled out a new set of rules that officials said were designed to improve implementation of the Endangered Species Act.

The new rules clarify the distinction between “threatened” and “endangered” species, and set higher standards for unoccupied areas to be designated as critical habitat. Before federal officials declare a critical habitat, the area must contain one or more physical or biological features essential to conserving the species.

Myron Ebell, director of the Center for Energy and Environment at the Competitive Enterprise Institute, a libertarian think tank in Washington, told lawmakers he sees cause for encouragement in the Trump administration’s reforms and the package of legislation crafted to modernize the Endangered Species Act.

Ebell noted that a research paper published last year by the Competitive Enterprise Institute, “’Whatever the Cost’ of the Endangered Species Act, It’s Huge,” offers suggested policy changes to improve the transparency and accountability of listings under law and designations of critical habitat.

“Our motto at CEI has been the ESA is bad for wildlife because it’s often bad for people,” Ebell said. “The reason is because the costs of dealing with endangered species and protecting habitat and recovery are often borne by private landowners.”

Ebell said Congress should authorize “a comprehensive audit” of the costs of the law and pass legislation that compensates property owners for “regulatory takings.” (His complete comments are available here.)

Kathleen Sgamma, president of the Western Energy Alliance, told elected officials that the more than 300 oil and natural gas companies belonging to the trade association are devoted to conservation, but that the Endangered Species Act is skewed against them.

Jonathan Wood, a lawyer with Pacific Legal Foundation, a nonprofit, public interest law firm headquartered in Sacramento, California, expressed support for the draft package of legislation. Until now, the Endangered Species Act has been beset with perverse incentives that need to be changed, he said.

“One of the most important lessons we’ve learned is that although the law works for preventing the extinction of species, it does not work at promoting recovery,” Wood said. “And the reason for that is the most important factor for recovering species is creating incentives for the private landowner to protect and restore habitat, and we simply don’t do that.”

“I’m glad to see many of the bills that are part of this package aimed at reducing that conflict while providing those better incentives,” he said, adding:

In fact, one of the focus areas I see in the bills is to codify administrative practices developed by Republican and Democratic administrations to make the law work better. That codification is particularly important because it heads off the risk of litigation. Perhaps the biggest effect of the ESA has been to incentivize litigation. As an environmental attorney, I appreciate the work, but in the long run we are not doing well by the species we all care about. As part of that codification process, I think it’s important to codify the recent rules adopted by the Trump administration.

Rep. Debbie Lesko, R-Ariz., warned that her Democratic colleagues are advancing an alternative version of reform that she said would “hurt industries, and quite frankly hurt America” if they ever became law.

Brian Seasholes, executive director of the Southwestern Communities Coalition, testified Tuesday before a House Natural Resources subcommittee, cautioning policymakers to avoid changes to the Endangered Species Act that would impose high costs on landowners without achieving any conservation benefit.

In his opening statement at the roundtable, Gosar, chairman of the caucus, criticized House Democrats for currying favor with environmental activists.

“Our roundtable with real people impacted by ESA listings is a nice contrast to the hearing currently being held by the Natural Resources Democrats that seeks to move the country backwards by repealing three news regulations just implemented by the Trump administration,” Gosar said.

“The Democrats’ two main witnesses are from Earthjustice and Defenders of Wildlife, left-wing environmental groups that are more interested in filing frivolous litigation in order to prop up their extremist organizations than they are in doing constructive things that actually help species,” the Arizona Republican said.

“Defenders of Wildlife is dedicated to the conservation of imperiled wildlife and their habitat, a mission that is supported by millions of Americans,” Bob Dreher, the group’s senior vice president of conservation programs, said.

“We use litigation to hold government officials accountable to the laws enacted by Congress, a public interest that is more urgent now than ever.”