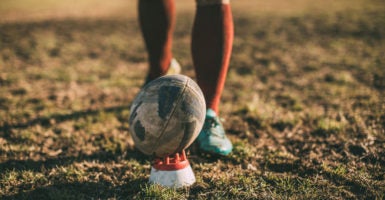 Women’s rugby referees in England are quitting their jobs over the inclusion of male athletes. (Photo: South_agency/Getty Images)

Biological males who identify as transgender women are wreaking havoc in women’s rugby in Great Britain.

Women’s rugby referees in England are quitting their jobs over the inclusion of the male athletes, according to a report in The (London) Sunday Times.

“Being forced to prioritize hurt feelings over broken bones exposes me to personal litigation from female players who have been damaged by players who are biologically male. This is driving female players and referees out of the game,” one referee told the British newspaper under the condition of anonymity.

“If you even ask the question, you are told you are a bigot,” another referee told the Times, recounting that five different players with beards played with women’s teams over the course of half a season.

“She’s going to be a good, good player for the next few years, as long as we can stop her injuring players in training,” Morgan’s coach, Brian Minty, told the BBC last month.

The team’s captain, Jessica Minty-Madley, told the British network that Morgan “folded a girl like a deckchair during a game, which was quite funny, but they’re still friends.”

“I do feel guilty, but what can you do?” Morgan told the British network in an interview. “I don’t go out to hurt anybody. I just want to play rugby.”

Democrats in Congress and on the campaign trail have rallied behind the Equality Act, which would amend the Civil Rights Act of 1964 to make “gender identity” a protected characteristic under federal anti-discrimination law.

The bill passed in the House with unanimous Democratic support in May, but it hasn’t come up for a vote in the Republican-controlled Senate.