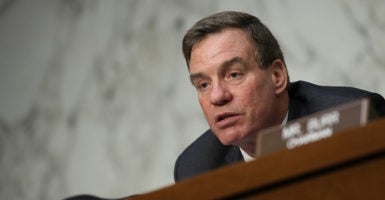 The Senate is expected to vote soon on a resolution aimed at curbing the president’s efforts to reduce health care premiums and expand insurance options for Americans.

Sen. Mark Warner, D-Va., authored the resolution, which would curtail an administration initiative that was the driving force behind the first-ever reduction in average Obamacare premiums: the authority to grant states waivers from certain regulatory requirements in the Affordable Care Act.

Warner has filed a motion to force a Senate vote on his resolution by Nov. 12. The Warner resolution would be considered under a special procedure that prevents filibusters, allowing the measure to pass on a simple majority vote.

At issue is a provision of the Affordable Care Act (Section 1332) that authorizes states to obtain waivers from some of the law’s onerous provisions.

The Obama administration issued Section 1332 guidance in 2015 that made it difficult for states to win waiver approval. The Trump administration rescinded that guidance and issued one that grants states more flexibility in making health insurance more affordable.

The Warner resolution would nullify that guidance.

The measure would restrict the administration’s authority to pursue the only path that has proven effective at reversing the upward spiral of health insurance premiums: 1332 waivers.

A total of seven states won approval for their 1332 waivers requests for 2019: Alaska, Maine, Maryland, Minnesota, New Jersey, Oregon, and Wisconsin. The result: In those states, average premiums for Obamacare plans declined this year by an average of 7.5%.

Meanwhile, premiums in non-waiver states rose by an average of 3.1%.

The seven states that obtained waivers were able to redirect federal money, which would have been paid directly to insurance companies in the form of federal premium subsidies, to state programs that cover medical costs for residents in poor health.

The Trump administration wants to build on this success by encouraging states to use the 1332 waiver process to seek broader and more innovative reforms.

The Centers for Medicare and Medicaid Services, for example, has invited states to submit proposals to use Obamacare premium subsidy money to create and fund personal accounts, which low-income people could use to buy the insurance coverage of their choice.

Currently under the Affordable Care Act, those premium subsidies are paid directly from the Treasury to insurance companies.

The Centers for Medicare and Medicaid Services also announced that it would welcome state proposals to let residents use premium subsidies to buy state-approved policies that do not comply with Affordable Care Act regulations.

The Warner resolution would stop this progress in its tracks.

Proponents of the resolution say it is needed to protect people with preexisting conditions. That is false. Section 1332 does not authorize the Centers for Medicare and Medicaid Services to waive regulations that require insurers to cover such conditions.

Nor can the agency waive requirements that insurers issue policies to any consumer who wants to buy one and that prohibit insurers from charging people higher premiums because of their medical condition. Policies that meet these stringent (and costly) requirements still must be available to all consumers in the state.

Supporters of the Warner resolution argue that it is needed to prevent the sale of “junk insurance,” which they define as any insurance policy that doesn’t comply with all the Affordable Care Act’s health insurance mandates. This assertion also is false.

States that obtain 1332 waivers still must make Obamacare-compliant insurance policies available to all residents, and they still must subsidize premiums for these policies.

But states also can make other, more affordable insurance policies available to residents and seek federal approval to give low-income people the option to apply their subsidies to such policies.

States can, in short, give their residents the option to choose the coverage that best meets their needs.

The Trump administration is using the 1332 waiver process and other regulatory tools to offer Americans more attractive and affordable health insurance options.

The Warner resolution would stifle these efforts.

The Senate should focus on enhancing federal and state efforts to expand health care choices and reduce costs, rather than placing roadblocks on the path to reform.