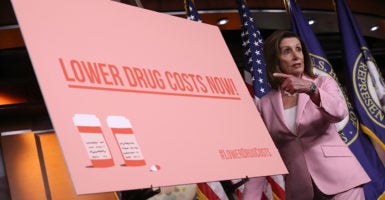 An earlier version of this post was based on a summary of House Speaker Nancy Pelosi’s prescription drug pricing bill that was leaked to the press prior to the bill’s introduction. The post has been updated and revised to describe the bill as introduced and to incorporate additional material.

The House of Representatives this week will begin acting on a bill that would limit Americans’ access to lifesaving medicines, impede the development of new treatments for deadly and debilitating diseases, and increase health spending over the long term.

The Lower Drug Costs Now Act of 2019 (H.R. 3), introduced last week with the backing of House Speaker Nancy Pelosi, D-Calif., would double down on the failures of existing government policies that have distorted prescription drug prices and contributed to higher health care costs.

Two House committees (Energy and Commerce and Education and Labor) will hold hearings on the bill this week. Pelosi is reportedly aiming for a House floor vote prior to Thanksgiving.

H.R. 3 would establish a system in which the U.S. government bases prices for cutting-edge drug treatments on those set by foreign governments.

The measure would set an upper price limit at 1.2 times a drug’s average price in six other countries (Australia, Canada, France, Germany, Japan, and the United Kingdom).

The secretary of health and human services then would seek to “negotiate” prices below that upper limit for at least 25—and as many as 250—drugs each year.

The prices resulting from these “negotiations” would be applied throughout the U.S. market. The government would require manufacturers to offer that price to private, as well as public, payers or face massive fines.

A manufacturer that declined to negotiate the price of any of its products would incur an excise tax of up to 95% of the revenues it derived from that product in the preceding year.

H.R. 3 also would confiscate money from manufacturers for pricing actions they took place years before H.R. 3 became law. The health and human services secretary would collect “rebates” from manufacturers to the extent they have raised the price of any Medicare-covered drug since 2016 by an amount that exceeds the general inflation rate.

The bill represents an unprecedented exercise of raw government power.

The federal government already imposes price curbs across a range of programs, requiring manufacturers to pay the government rebates in Medicaid and the “340B” program, and discounts in Medicare, as well as to make various price concessions in the Veterans Affairs health system.

These provisions all are confined to federal programs, but nonetheless have distorted drug prices throughout the health sector.

Proponents of H.R. 3 claim that it would have no adverse effect on innovation or on access to pharmaceuticals. But aggressive government price-setting has damaged innovation and limited access to new treatments in all six of the countries whose price controls the bill would import.

If the U.S. adopts price controls, it risks the same results here.

Access to new drugs is much greater in the U.S. than in countries with price controls, in part because of having shunned price controls.

Of new active substances introduced between 2011 and 2018, 89% are available to Americans, compared with 62% in Germany and 60% in the United Kingdom. One-half or more of these new therapies are unavailable to Australian, Canadian, French, and Japanese patients.

This lack of access can have damaging effects. A study by IHS Markit examined outcomes for non-small cell lung cancer, the leading cause of cancer mortality in the U.S. and the world. The report compared how Americans with that disease fared, compared with citizens of other highly developed countries, including Australia, Canada, France, and the U.K.

The study concluded that Americans gained 201,700 life years as a result of faster access to new medicines. Half those gains would have been wiped out, the study found, if Americans had the same limited access to those treatments as patients in other countries.

Patients will be worse off if Washington emulates the price control regimes of foreign governments.

Countries with price controls also suffer a decline in pharmaceutical research and development.

In 1986, European firms led the U.S. in spending on pharmaceutical research and development by 24%. After the imposition of price control regimes, they fell behind. By 2015, they lagged the U.S. by 40%.

Trading innovation and access to new medicines in exchange for lower prices on existing products may strike some as a good deal. But according to the president’s Council of Economic Advisers, it wouldn’t be.

The council concluded that while price controls might save money in the short term, they would cost more money in the long run. Government price-setting, it wrote, “makes better health care costlier in the future by curtailing innovation.”

One Redeeming Idea Worthy of Consideration

H.R. 3 does contain at least one potentially constructive provision; namely, a restructuring of the Medicare Part D drug benefit.

Title III of the measure would rework how the Part D program pays for the costliest drugs, relieving taxpayers of some of these costs and capping the amount seniors would pay out of their own pocket for prescription medicines.

The H.R. 3 version of this Part D restructuring, while potentially promising, requires revision. Other provisions in the measure—including the imposition of government price controls—should be removed. They would strike at the heart of the Part D program’s success.

Unlike other government programs, Part D relies on private markets—instead of government “negotiation” and bureaucratic fiat—to set drug prices. This market-based approach has contained Medicare spending on drugs and saved the program money on doctor and hospital care.

Congress Should Go Back to the Drawing Board

H.R. 3 would discard market-based reforms in favor of government price controls. In adopting the failed policies (and the government-set prices) of six foreign governments, it puts Americans at risk of reduced access to cutting-edge treatments and higher health costs in the long term due to a decline in innovation.

As drafted, H.R. 3 is a prescription for disaster and a missed opportunity to address the real reasons that government policies have led to higher drug costs for Americans.