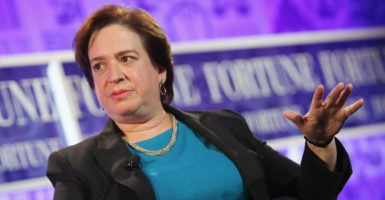 "I think we have to understand the world we’re living in and try, to the extent we can, to find common ground," Supreme Court Justice Elena Kagan says in an address to law students. Pictured: Kagan speaks at a 2013 event. (Photo: Paul Morigi/Getty Images)

Justice Elena Kagan said Monday night that concerns about the politicization of the Supreme Court are “overblown,” pushing back against suggestions that the court’s increasingly conservative makeup will strain public confidence in the judiciary.

Kagan told law students at the University of California, Berkeley, not to despair over current conditions, even as she agreed the high court can best maintain public trust by searching for consensus and avoiding the appearance of partisanship.

Progressives’ anxieties about the court’s newly entrenched conservative majority were comprehensively expressed in an amicus (or “friend of the court”) brief that Sen. Sheldon Whitehouse, D-R.I., filed in a pending Second Amendment case.

Whitehouse warned that a pro-gun rights ruling could inflame the liberal court-packing push and broadly accused the conservative justices of skirting neutral jurisdictional and procedural rules to deliver victories for Republican political interests.

The filing met with a cool reception among left-leaning judicial observers as it was widely condemned on the right.

Yet those criticisms are not quite borne out by the court’s 2018-2019 term. Though the justices divided 5-4 in 17 of cases, 10 of those decisions featured a majority of four liberals and one conservative.

Indeed, every justice in the court’s conservative bloc formed a 5-4 majority with liberal colleagues at least once. By contrast, the conservative justices stuck together to form a majority in seven cases.

As a general proposition, many of the court’s cases are decided with a high degree of agreement, while contentious 5-4 cases make up a comparatively small amount of its work. In that last two terms, about 40% of the Supreme Court’s cases were decided unanimously, and majorities of at least seven decided over half.

Yet the court’s upcoming term could strain its vaunted collegiality, with a docket heavy on politically salient topics.

The justices will begin hearing cases Oct. 7 after a summer hiatus.