With Millions in Dues at Stake Across US, One Man Fights His Union for a Refund 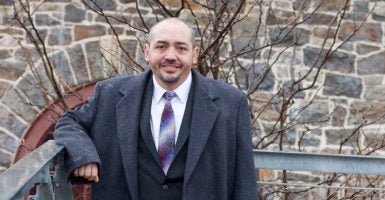 Francisco Molina, a former shop steward, ran into a problem when he resigned from SEIU Local 668 and demanded that the union stop deducting dues from his paycheck as a social services aide. (Photo: The Fairness Center)

Francisco Molina got a refund check from his former union compensating him for dues collected after he resigned his membership.

This means that the money Molina earned on the job since that time can’t be used to finance union political activity he doesn’t support.

But what about the dues he paid as a social services aide for Lehigh County, Pennsylvania, prior to resigning from the union? This question remains unresolved.

That’s because a Pennsylvania law makes it possible for labor unions to collect dues from government workers who decide they no longer want to be union members.

Molina, who was a shop steward for Service Employees International Union Local 668, ran into difficulty a little more than a year ago when he resigned from the union.

He told SEIU officials to stop collecting dues from his paycheck.

What happens next in his case, and others raising similar legal questions, could have ramifications across the country. Millions of dollars, perhaps tens of millions, in union dues and fees are at stake, according to legal filings.

Related: He Tried to Quit His Union. The Law Didn’t Let Him, and He Lost His Government Job Instead.

Molina has said he resigned from SEIU membership because his “personal values never matched the union’s.”

Liberty Justice Center, a nonprofit, public interest law firm based in Chicago, has joined with National Right to Work Legal Defense Foundation, a nonprofit legal advocacy group in Springfield, Virginia, to seek refunds of union fees that government employees claim were collected from them illegally.

These cases are active in Pennsylvania, New York, Maryland, and Illinois. In the Maryland case, Liberty Justice Center estimates that almost 10,000 state employees “could recoup up to $7 million that the union took from them.”

In a related case out of Pennsylvania, Liberty Justice Center estimates that about 2,000 employees “could recoup as much as $1 million in illegal union fees they paid between 2017 and 2018.”

Although Molina’s case is “unique among others’ cases seeking retrospective relief,” his lawyer said in an interview, Molina’s free speech arguments could reverberate across state lines if a federal court in Pennsylvania decides the union should refund dues he paid before resigning his membership.

Molina argues that he and other government employees were denied due process because the union didn’t apprise them of their First Amendment rights.

As The Daily Signal previously reported, the SEIU rejected Molina’s resignation letter dated July 16, 2018, saying he had to remain a union member under Pennsylvania’s “maintenance of membership” law, which applied to his contract.

Molina continued to protest, but Lehigh County dismissed him from his government job as a social services aide in the Office of Children and Youth Services on Aug. 14, 2018, a few weeks after he resigned from the union.

Molina filed a lawsuit in January against SEIU Local 668, challenging the union’s refusal to allow him to resign his membership and claiming it violated his constitutional rights under the First and 14th amendments.

The Fairness Center, a nonprofit, public interest law firm based in Harrisburg, Pennsylvania, represents Molina in the case filed with the U.S. District Court of the Middle District of Pennsylvania.

In July, Judge Yvette Kane dismissed portions of Molina’s complaint in an opinion that said the former shop steward’s pursuit of “retrospective monetary relief” is “moot” because the SEIU did agree to refund the dues he paid since his resignation from the union.

Molina also appeared to lack standing, Kane said, because he no longer was a union member when he filed the case. The judge was appointed in 1998 by President Bill Clinton.

Molina’s lawyer declined to reveal the amount of dues or fees involved in his case.

“SEIU officials are implementing a strategy to avoid court rulings on constitutional issues because they know they would lose,” David Osborne, a lawyer with The Fairness Center, told The Daily Signal in an interview.

“The judge in this case found in favor of the union and said the fact that [Molina] had gotten his money back means either he doesn’t have standing or the case is moot. These important claims have been dismissed, but the case is still active.”

Because the union “cried uncle” before the court addressed the substantive question of the constitutionality of the “maintenance of membership” provision of  Pennsylvania’s Public Employe Relations Act, Osborne said, the law will remain on the books for the time being.

Under the disputed provision, public employees may resign union membership only during a 15-day window before their contracts expire. Public sector unions such as the SEIU stipulate that members must submit a resignation letter by certified mail within that 15-day window.

But for Molina, and other public employees across the nation, the Supreme Court’s ruling in June 2018 in the case of Janus v. American Federation of State, County, and Municipal Employees turned out to be a game-changer because it struck down mandatory dues and fees imposed by unions for government employees.

Molina told The Daily Signal in an interview that the Supreme Court ruling in favor of Janus provided him with the impetus to resign from the SEIU.

Although the federal court dismissed Molina’s complaint seeking dues collected since he resigned from the union, his case remains active because the judge said she is willing to entertain his complaint seeking refund of “preresignation dues,” and to consider the possibility that he didn’t get due process.

“It’s not the end of the case for a couple of reasons,” The Fairness Center’s Osborne said. “Molina raised due process arguments because he believes he was not properly informed of his rights, and he has also made a claim seeking dues going back for two years based on the fact that he believes the membership card he signed was invalid. So, his case is not dead.”

In the meantime, SEIU Local 668 appears to have dropped the “maintenance of membership” requirement in its new collective bargaining agreement for state employees over concerns that the state’s legal provision is unconstitutional.

The Daily Signal sought comment from SEIU 668 on the latest developments. The union had not responded by publication time.

“Francisco [Molina] believes he’s entitled to a return of pre-Janus dues in part because the SEIU itself recognized that the membership card he signed prior to Janus was invalid,” Osborne said. “So Francisco could make a national impact with his case, but I’d describe the impact as establishing a foothold—not necessarily a right—for any other public employees who want to recover pre-Janus dues payments.”

While Molina and other government employees in Pennsylvania press their cases in court, some state lawmakers have introduced proposed changes to state law that would strike “maintenance of membership” requirements as unconstitutional in light of the high court’s Janus ruling.

State Rep. Kate Klunk, a York County Republican, introduced a measure (HB 785) that would require government employers to notify workers of their rights. State Rep. Greg Rothman, a Cumberland County Republican, introduced a bill (HB 506) to allow government employees to resign from a union anytime they like, without a window to do so or any other restrictions.

“The Janus decision was a watershed moment for workers’ rights, but our report shows that a lot of heavy lifting still needs to be done to ensure the ruling is enforced,” Charles Mitchell, president and CEO of Commonwealth Foundation, told The Daily Signal in an interview, adding:

Since Pennsylvania is not a right-to-work state, it stands out as one of the states most impacted by the decision. But our ‘maintenance of membership’ law represents a loophole allowing union leaders to keep public employees locked into paying dues and supporting political positions at odds with their own.

Thankfully, Pennsylvania lawmakers are proposing to do away with resignation restrictions. Other states, especially those friendly to worker freedom, should seize on the Janus ruling as an opportunity to update their own statutes. Union leaders will continue calling in political favors from their allies in government. We can’t let them undermine the workers’ constitutional rights.