Some Cleveland Leaders Want to Bring Back Legislative Prayer. They Can, and Should. 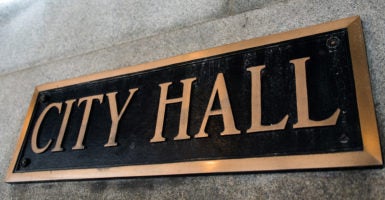 Prayer at legislative gatherings is as old as the United States—perhaps older, if we reach back in time to the Pilgrims’ landing at Plymouth Rock.

Legislative prayer is such a traditional part of who we are as a country, in fact, that it should be one of the least questionable topics of our day.

That’s why some on Ohio’s Cleveland City Council would like to bring the practice back to its meetings. And the law supports them if they do.

In fact, they should feel more confident than their opponents. Not only has the Supreme Court twice upheld the constitutionality of prayers before public meetings, the U.S. Court of Appeals for the 6th Circuit—in which Cleveland sits—has also upheld the practice.

In Jackson County, Michigan, lawmakers had a decades-old tradition of opening their meetings with a prayer, led by one of the elected members of the County Commission. Commissioners would rotate as prayer-giver every meeting, each praying, or not, according to their particular religious tradition.

But then in 2013, a local activist claimed the prayers violated the establishment clause of the First Amendment. His lawsuit claimed that because elected lawmakers were leading prayers, the state had unlawfully established a religion in violation of the “wall separating church and state”—a phrase which, notably, never appears in the Constitution.

A federal appellate court disagreed. In 2017, the 6th Circuit Court of Appeals upheld the county’s tradition in Bormuth v. County of Jackson. Judge Richard Allen Griffin, writing for the majority, explained that the Supreme Court had twice upheld the practice of legislative prayer.

Indeed, in the 1983 Supreme Court decision in Marsh v. Chambers, the justices had come down solidly on the side of legislative prayer.

Chief Justice Warren Burger explained that prayer before public meetings “presents no more potential for establishment [of religion] than the provision of school transportation, beneficial grants for higher education, or tax exemptions for religious organizations”—practices which the court has long upheld as constitutional.

The 6th Circuit agreed, but the Jackson case presented a twist: What if the prayers were issued by a lawmaker rather than a chaplain or private citizen, as was the case in Marsh and, more recently, Town of Greece v. Galloway?

He reasoned that it would be nonsensical to approve a prayer issued by a chaplain, but disapprove the same prayer issued by an elected official. Thankfully, the Constitution makes no distinction: lawmakers, as well as chaplains and citizens, are permitted to provide legislative prayers.

Judge Jeffrey Sutton concurred. In his opinion, he said judges should stay out of the business of scrutinizing legislative prayers, acting like a “helicopter parent, scolding/revising/okaying the content of this legislative prayer or that one.”

Rather, he noted that “for all of American history” we have welcomed prayers before public meetings, including by those elected officials for whom the prayers were meant.

So, he posed the rhetorical question: “If the explanation for an invocation prayer is the humble act of seeking divine guidance before a session of government, is it not strange for judges to interfere with the content (e.g. God, Allah, or Jesus) or symbols (e.g. making the sign of the cross or not) of that official’s prayer?”

The constitutionality of legislative prayer is further underscored by the Supreme Court’s most recent declaration in American Legion v. American Humanist Association.

In that case, Justice Samuel Alito, writing for the majority, noted that “religiously expressive” practices, such as legislative prayer that have long been a part of our nation’s history and heritage, bear “a strong presumption of constitutionality.”

And, just a few weeks ago, the U.S. Court of Appeals for the 3rd Circuit, in Fields v. Speaker of the Pennsylvania House of Representatives, extended that presumption to prayers before the Pennsylvania Legislature.

Without question, as we recently explained in a letter sent to the council members, the Cleveland City Council is on solid legal ground to restart its practice of legislative prayers. So, too, are state legislatures, city councils, county commissions, and school boards throughout the 6th Circuit and beyond.

Those prayers may even be led by those elected to govern. And, when they stand to solemnize the proceedings by their prayers, they are welcome to pray according to their particular religious tradition.

Extending that level of freedom to all Americans, whether they are private citizens or elected officials, reflects the very best of the American brand of freedom.

It acknowledges the rich contribution religion provides to our nation. It recognizes that citizens retain their God-given freedoms even upon their election to office.

And, it connects us to the long line of Americans before us who employed the same freedom in their day.