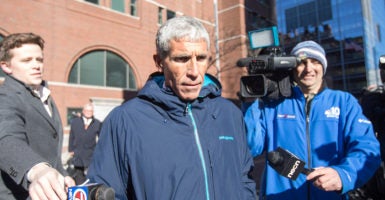 That’s how many people have been indicted or otherwise charged in the college admissions and testing-bribery scandal.

When the story first broke last spring, we wrote that the first round of indictments had to be the tip of the iceberg, because over time, those in the government crosshairs would sing like a bird—and boy, have they ever.

So, what has happened since the story first broke, and where does this sordid saga go from here?

The U.S. Attorney’s Office for the District of Massachusetts took the lead in these cases. As we detailed here and here, the case broke wide open in March, when the government unsealed an indictment and criminal complaint against scores of parents who were desperate to get their kids into colleges they otherwise could not get into on their own merit, passing them off as recruited athletes.

The 52nd defendant is Xiaoning Sui, from British Columbia, Canada. She was arrested in Spain this week and charged by indictment in federal district court in Boston. Extradition proceedings to get her back to the United States will start soon.

According to the indictment, Sui conspired with the ringleader William “Rick” Singer to get her son into UCLA as a soccer recruit, and paid Singer $400,000 to accomplish the task.

Singer took photographs of Sui’s son—a tennis player—and worked with co-conspirator and government cooperator Laura Janke, who pleaded guilty on March 14 and will be sentenced Jan. 18. Janke fabricated a soccer profile for the boy, passing him off as an ace player for two private soccer clubs in Canada.

Singer, in turn, worked with the head men’s soccer coach at UCLA, Jorge Salcedo, to pass the boy off to the UCLA admissions office as a top recruit for Salcedo.

It worked. The boy was admitted as a soccer recruit, and was awarded a 25% scholarship as part of his recruitment.

Singer reportedly mailed a check to Salcedo for $100,000. Salcedo was indicted and arraigned in federal court in March, pleaded not guilty, and has a status hearing with the judge in Boston on Oct. 1.

Like all defendants, Salcedo is presumed under the law to be innocent, unless and until proven guilty beyond a reasonable doubt.

Recall that Singer was the “fixer” who the parents worked with to get their children into college by the “side door”—the phrase that he used when working with parents, accepting their money, fixing test scores, and bribing college officials.

Apparently, the “front door,” the standard way of trying to get into college—get good grades, take the SAT/ACT on your own, apply to college, and see if you are admitted—wasn’t good enough for these defendants.

Nor was the “back door,” which apparently is to give huge sums of money to a college for a dormitory, sports field, or endowment, because there was no guarantee that your progeny would be accepted by the admissions office.

The Massachusetts U.S. Attorney’s Office has created a handy webpage that lists each defendant, the charges, the case status, the sentence the government has recommended, and the sentence the district court judge imposed.

As you can see from the chart, there are two categories of defendants: those charged by an indictment (which is returned by a grand jury) and those charged by an information (a charging document filed by the U.S. attorney, in which the defendant waives his or her right to have the charges presented to a grand jury, which often happens when a plea agreement has been reached).

Twenty-three defendants have pleaded guilty to an information, including actress Felicity Huffman. Huffman was one of two defendants to date who have been sentenced. Six defendants, including Singer, have agreed to cooperate with the government’s investigation.

Twenty-five defendants have pleaded not guilty, including another actress, Lori Loughlin. Two defendants have not yet pleaded, and two others have filed motions to dismiss their indictments.

The next date to watch is Oct. 2, when several of the defendants have status conferences with the trial judge.

Behind the scenes, government prosecutors no doubt have been providing defense lawyers with a preview of their case against each defendant, who in turn will discuss with their attorneys the pros and cons of contesting the charges or pleading guilty.

The fact that Singer has pleaded guilty and is cooperating with the government strengthens the government’s hand in many, if not most, of these cases.

Expect to see more guilty pleas by those indicted, and likely more charges filed against new defendants as this sordid tale continues to unspool.