Tea Party Rallies for Freedom, Against Socialism in Nation’s Capital 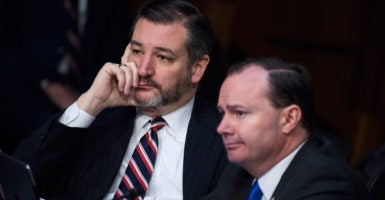 Conservative leaders denounced socialism and celebrated the 10th anniversary of the founding of the tea party movement during a rally Thursday on the U.S. Capitol grounds.

Dubbed “Stop Socialism, Choose Freedom,” the rally on the west lawn of the Capitol drew perhaps 150 tea party activists and supporters of President Donald Trump from across the country.

Jenny Beth Martin, co-founder and national coordinator of the group Tea Party Patriots, called on conservatives to resist the surge of socialist policies within liberal circles.

“Let’s continue to stand for freedom,” Martin said. “Let’s make sure that Americans know we are going to do all we can to stop socialism and choose freedom.”

Martin stressed that the tea party movement is alive and well, and said it is ready to do battle with Democrats and others pushing for big government spending and wealth redistribution.

Sen. Ted Cruz, R-Texas, a longtime tea party ally, was a headliner at the rally and the crowd cheered him as he bashed the new wave of socialist politicians.

Touting gains made with conservative leadership, Cruz highlighted the rise in employment, tax cuts, and improved economy under the Trump administration.

“They look at jobs. They look at prosperity. They look at people rising out of poverty into the American dream,” Cruz said of politicians on the left. “And what do they say? ‘Let’s go the other direction.’”

Cruz, after citing examples of failed socialism in Venezuela and Cuba, made a fiery denunciation of new attacks on Supreme Court Justice Brett Kavanaugh.

But the Texas Republican concluded by arguing that conservatives should not respond to leftist attacks in kind.

“We should be happy warriors, with joy,” Cruz said. “Contrast the joy of freedom, of America, with the angry intolerance of the socialist left.”

The rally featured several speakers who could attest firsthand to the problems of socialism and communism.

Oskar Arreaza of Venezuela told his story of the destruction of that nation’s economy by socialist policies. Jennifer Zeng, a Chinese human rights activist, described being tortured by the communist government in her home country.

Sen. Mike Lee, R-Utah, took the stage to extol the value of the Constitution and decry liberals he said are trying to tear it apart.

“The sole purpose of the Constitution is to restrain government, and that’s a good thing, isn’t it?” Lee said.

Sen. Mike Braun, R-Ind., offered his story of moving from the private sector to the public sphere to respond to inaction in Congress.

“I was fed up with business as usual in that place right there,” Braun said, pointing to the Capitol behind him. “This place is more gummed up and dysfunctional than even what I thought.”

Braun argued for term limits for members of Congress, saying that rampant corruption is a major enemy to Americans.

The crowd got especially excited to hear from popular radio talk show host Mark Levin, who reminded attendees of America’s rich heritage of freedom stretching back to the Declaration of Independence and Constitution.

“Look around you,” Levin said, his voice rising to a shout. “This is freedom!”

Levin, who also has a weekly TV show on Fox News Channel, argued for private, patient-focused health care rather than government-run health care as proposed by advocates of “Medicare for All” and similar proposals.

Levin pointed to the government’s incompetence in managing the Veterans Health Administration, where some veterans have waited years for appointments. Many on the left want to “force you all into the VA,” he said.

Levin also argued for a strong national defense and tight security at the southern border.

Ted Carey, 63, from Tuxedo Park, New York, said he was involved at the inception of the movement.

“I was moved for my kids to participate in the tea party,” Carey said. “Everything that the left espouses crumbles under critical thinking.”

Norma Anderson, 32, from Yakima, Washington, said she is a fan of socialism.

However, when people don’t have a choice about health care and jobs, that doesn’t line up with her idea of socialism, Anderson said. She said she couldn’t think of any country that practices socialism her way.

“Honestly, I feel like I need to research more,” Anderson said.