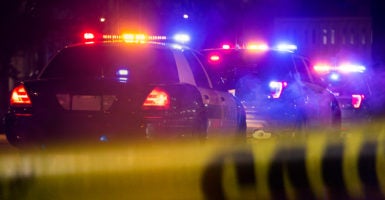 The City Council proposal comes as D.C. has seen a 15% uptick in murders and a 8% uptick in robberies in the past year. (Photo: MattGush/Getty Images)

One defendant killed an innocent 7-year-old child. Another shot a 24-year-old mother in the back. Others kidnapped a woman, held her in the back of a stolen van, and repeatedly gang-raped her.

These and about 583 other violent offenders—including murderers, rapists, and child molesters—could soon be let out of prison if Charles Allen, a D.C. Council member, has his way.

Allen recently proposed the Second Look Amendment Act of 2019, which would allow violent felons to get out of prison early—even if they haven’t had a parole hearing—and would prevent the judge from considering the nature of the crime(s) they committed.

The Washington Post editorialized against it, saying that the “council is putting the public at increased risk.” And the District’s top prosecutor, U.S. Attorney Jessie Liu, sent a letter to Allen explaining why the scheme is bad policy and dangerous.

If enacted, Allen’s dangerous gambit would likely result in even more violent crime in the crime-ridden city. (Washington, D.C., was recently ranked as the 11th most dangerous city in the U.S.)

It would also reopen wounds for victims and their families.

This isn’t Allen’s first time doing this. In fact, this would be the third time he’s urged the D.C. Council to pass similar laws.

Many think that the laws passed in 2016 and 2018 went too far, but regardless of one’s views on that subject, Allen is pushing ahead with this new expansion of these laws before anyone can measure the full effects of the earlier laws on public safety.

In 2016, the D.C. City Council, at Allen’s urging, passed a law to reform the criminal justice system for young offenders. The Comprehensive Youth Justice Amendment Act of 2016 substantially revised how D.C. law handles youthful offenders charged in adult court. Section 301 of the law is called the Incarceration Reduction Amendment Act of 2016.

This act, which went into effect on April 4, 2017, gave 16- and 17-year-old offenders who were convicted in the Superior Court (D.C.’s adult criminal court) an opportunity to get out of prison early.

To be clear, the law does not apply to all 16- and 17-year-old offenders, but only those convicted in Superior Court (D.C.’s adult criminal court). That’s an important distinction, because youths charged in Superior Court are those who are tried as adults because they have committed particularly heinous crimes—murder, rape, child molestation, and the like. The rest stay in juvenile court.

Before petitioning the court for early release, the convicted felon has to have served at least 20 years of his original sentence, but is not yet eligible for parole.

Then, after considering 11 factors, including “the nature of the offense and the history and characteristics of the defendant,” a Superior Court judge may reduce the remainder of the offender’s sentence if he or she is convinced that “the defendant is not a danger to the safety of any person or the community and that the interests of justice warrant a sentence modification.”

In a recent article criticizing the newly proposed law, former Assistant U.S. Attorney Glenn Kirschner, who led the homicide division in the U.S. Attorney’s Office, shared the story of David Bailey, who had killed three people (two by shooting, one by stabbing) in two separate incidents by the time he was 17.

A judge released Bailey early under the 2016 law despite disciplinary infractions committed in prison (one of the factors the law required the judge to consider), a history of violence, and opposition from the victims’ families.

Kirschner explained that the law forces victims and their families to “relive the trauma they work so hard to put behind them.” And when the defendant goes free they “are left angry, fearful, and in a very real sense victimized anew, this time by their government.”

In her letter criticizing Allen’s 2019 bill, Liu described the problems with the 2016 law: namely, the challenges in implementing it, the devastating impact on the victims’ families, and the strain on resources.

She noted that motions for these sentence reductions are driven exclusively by the defendant and defense. In some cases, the defense will contact the victims or their relatives without the prosecution even knowing the defendant plans to file a motion.

As such, the victims and their families are notified of the potential early release of their victimizer “by the party with the least interest in the victim’s well-being.”

Liu describes victims’ family members as being “particularly upset, confused, and distressed by this experience.”

Even before the ink was dry on Incarceration Reduction Amendment Act, and before there was time to study whether the early-released offenders went back to a life of crime or the law’s effects on the community, the D.C. Council expanded the law.

The 2018 amendment, innocuously called the Omnibus Public Safety and Justice Amendment Act of 2018, took effect in May and did four things.

First, it eliminated the “nature of the offense” as a factor that the judge must consider in deciding whether a sentence reduction is warranted. How the defendant murdered, raped, strangled, mutilated, stabbed, burned, or otherwise harmed another person is now supposed to be completely irrelevant to the judge’s decision.

In other words, in determining whether it’s safe to release a violent criminal back into the community, the judge cannot consider any of the circumstances surrounding the defendant’s past violent act(s).

Think about that for a moment.

Second, the amendment instructed judges to consider that the “diminished culpability of juveniles” counsels against giving them long sentences “despite the brutality or cold-blooded nature of any particular crime.”

Tell that to the woman who was kidnapped and repeatedly gang-raped.

As Liu put it (rather mildly) in her letter: “By not considering the nature of the offense, we fear the Council is sending the unintended message that the violent crimes committed against these victims and their families do not matter. That is a profoundly disturbing message.”

Third, the 2018 law forbade a sentence of life without parole for anyone covered by the 2016 law, no matter how heinous the defendant’s crimes.

Finally, the law restricted a judge’s discretion in deciding whether to release an offender early and tilted the playing field dramatically in the offender’s direction by amending the 2016 law and directing that a judge “shall”—rather than “may”—reduce the sentence if the defendant satisfies the factors.

The 2018 law, in essence, created a presumption of early release.

This was the state of the law before Allen introduced the Second Look Amendment Act of 2019.

Allen’s newest amendment would do two major things: First, it would shorten the required minimum period of incarceration from 20 years to 15 years. Second, it would expand the pool of convicted felons eligible for early release from 16- and 17-year-olds to all violent felons who committed their crimes before the age of 25.

Allen’s reckless amendment is particularly dangerous if you understand the crime trends in the United States, and the District of Columbia in particular.

According to the Justice Department’s Bureau of Justice Statistics, the homicide trends in the United States from 1980 to 2008 show that the 37.5% of all homicide defendants were between the ages of 18 and 24, followed closely by 28% in the 25-34 age bracket.

In other words, about 65% of all homicide defendants in the United States over the 28-year period were between the ages of 18 and 34.

Allen’s amendment, if enacted, would allow a 17-year-old convicted murderer out on the street at the age of 32.

This comes as the D.C. violent crime problem is worsening, despite the best efforts of the police and prosecutors. Compared to last year at this time, D.C. has seen a 15% increase in murders and an 8% increase in robberies.

Fortunately, rapes have gone down by 31% year-over-year, as have assaults with a dangerous weapon.

Violent crime in the District overall has gone up 1% year-over-year to date, and this is before we’ve had time to analyze the effects of the 2016 and 2018 laws.

Just how many additional violent criminals would Allen’s scheme apply to, over and above those already eligible under the 2016 law and the 2018 amendment?

According to Liu, at a public hearing in March, various speakers “emphasized the importance of having a fulsome support structure in place to assist defendants in returning to the community.”

In expressing her agreement, Liu observed:

Any defendant released from imprisonment faces a difficult transition back to civil society. For defendants eligible for relief under the [Incarceration Reduction Amendment Act], the challenges are even greater.

These defendants entered the penal system at a young age and often before they developed the habits of responsibility, spent at least 20 (soon to be 15) years in an exceedingly structured environment, and must return to a world that is unstructured and immeasurably different than the one that they left.

For their sake, and for the sake of the community at large, it is imperative that a well-thought-out and appropriately resourced support system be established before they are released.

It is not clear that such a comprehensive support system is in place.

This is a serious problem that ought to be addressed.

The Second Look Amendment Act of 2019 is simply too big a risk to take without studying the effects on public safety of the changes that have already taken place.

Moreover, it would be a mistake to release violent offenders who may still be in the prime of their criminal careers without ensuring that well-established training programs and systems are in place to maximize the likelihood that a defendant is, to quote Liu, “sufficiently rehabilitated, mature, and fit to re-enter society.”

While scholars at The Heritage Foundation have long supported sensible criminal justice reform measures (see, for example, here, here, here, here, and here), this proposal goes too far, too fast, and poses an unacceptable risk to public safety in a city that already has one of the highest violent crime rates in the country.