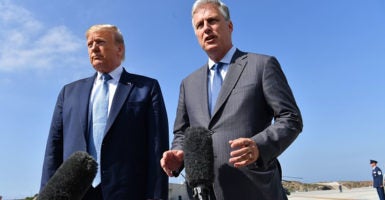 “We’ll be adding some very significant sanctions onto Iran,” Trump told reporters Wednesday in Los Angeles. “We’ll be announcing it over the next 48 hours.”

Trump said he has “many options” and that he hopes to avoid the “ultimate option” of going to war with Iran.

“There’s the ultimate option and there are options that are a lot less than that,” he said.

“I would let them come,” Trump said. “I’ve always felt the United Nations is very important. … I don’t think it’s ever lived up to the potential it has.”

The president conducted an informal press conference on the tarmac after Air Force One landed while he was on his way to visit portions of newly constructed border wall. He stood with his new national security adviser, Robert O’Brien, named earlier in the day to replace John Bolton, ousted Sept. 10.

O’Brien has served since spring 2018 as the special presidential envoy for hostage affairs. He helped secure the release of Christian pastor Andrew Brunson from a Turkish prison. Earlier this year, O’Brien took the lead in achieving the release of American rapper A$AP Rocky from a jail in Sweden.

Trump said O’Brien has “brought a lot of people home.”

“He’s worked with me for quite a while now on hostages, and we’ve got a tremendous track record with respect to hostages,” Trump said.

Asked about Iran, the new national security adviser wasn’t specific, saying: “We’re looking at it those issues now.” He said he would advise the president in private.

Trump also got a question about criticism from Sen. Lindsey Graham, R-S.C., that Iran perceived the United States was weak when the administration didn’t respond to Iran’s shooting down a U.S. drone June 20.

Trump made a strong choice in tapping O’Brien as national security adviser, two experts from The Heritage Foundation said in a joint statement.

“O’Brien’s diplomatic experience and record of national service will serve him well as he steps up to lead the National Security Council [and] we are confident he will do so with resolve and determination at a time when the enemies of the free world seek to harm the United States, its allies, and global security on several fronts,” James Carafano, Heritage’s vice president for national security and foreign policy, and Nile Gardiner, director of Heritage’s Margaret Thatcher Center for Freedom, said.

“From confronting our adversaries in Russia, China, Iran, and North Korea, to strengthening our closest partnerships with our friends in the U.K., NATO, and beyond, O’Brien will be instrumental in safeguarding and advancing U.S. interests in the months to come,” they added.

This report has been corrected to reflect that the president spoke to reporters in Los Angeles.