Students at This College Decide to Join Reagan’s ‘Informed Patriots’ 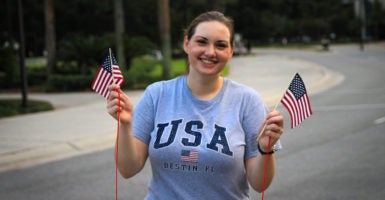 Megan Delaney, a 2019 graduate of Pensacola Christian College, was one of the original 60 volunteers who put together a flag memorial last year to honor the victims of the 9/11 attacks. (Photo: Jenneth Dyck for The Daily Signal)

President Ronald Reagan spoke of “informed patriotism” when charging America, in his farewell address in 1989, to educate future generations on the importance of freedom.

Three decades later, a history education student at a liberal arts college in Florida decided to do just that, adopting Reagan’s informed patriotism as her central goal for a new campus club.

Sarah Williams, now a senior at Pensacola Christian College, founded a political science club that caters to the average student who wants to know more about conservative principles and the Constitution.

“Our passion was to see young people realize the importance of freedom we’ve been given and how it’s our responsibility as Americans to become the educated patriots that Reagan talked about,” Williams says.

The club, called Freedom Forum, attempts to break the mold of other academic clubs by appealing to students campuswide, regardless of their major. Each meeting is tailored specifically to the everyday American, from future doctors to future engineers.

“When I look at the preamble to the Constitution, I don’t see ‘We the political science majors.’ I see ‘We the people.’ That encompasses all majors. We’re all Americans,” says Luke Ball, a 2018  graduate of Pensacola Christian College who now works as press secretary to Rep. Matt Gaetz, R-Fla.

Freedom Forum began in September 2018, when students placed 2,977 American flags on campus, one for each victim of the 2001 terrorist attacks. The memorial was entirely sponsored by Williams, who used the cash prize of an essay contest to pay for it.

This year, the memorial drew over 125 volunteers, more than double the number of students last year.

In addition to Freedom Forum, students established a patriotic prayer group in 2016 to pray for American leaders, the country, and issues affecting Christians. The local voting precinct is known for having high turnout because of student involvement.

During the 2000 presidential election, when the Florida panhandle became a deciding factor, many students “pondered whether PCC students perhaps made the difference in the election results,” says Amy Glenn, the college’s chief communication officer.

Pensacola Christian College is a nonpartisan institution, although many students believe it is in an important for Christians to be involved in politics.

“When I look in the Bible, I see a host of individuals who influenced government,” Ball says, citing biblical figures such as Daniel and Esther as key players in historical government.

“Now more than ever, we need young people who are truly educated in all areas,” history teacher John Reese says.

As Freedom Forum convenes again for a new school year, Williams acknowledges the rare gift of American freedom. But, she says, “with that incredible gift of freedom comes an incredible responsibility.”

Jenneth Dyck, a graduate of Pensacola Christian College, currently is a graduate student there. She is a former member of the Young Leaders Program at The Heritage Foundation.