How the Abortion Debate Displaced Economics on the G-7 Agenda 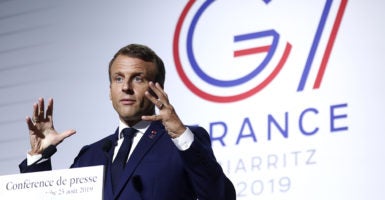 The recent meeting of the Group of Seven drew significant media coverage, but scant attention was paid to the war over abortion that infiltrated the meeting’s agenda.

The G-7 is a forum for the world’s most advanced economic powers to discuss policies relating to the economy, but this year, economics was largely missing from the discussion.

As Larry Kudlow, director of the White House’s National Economic Council, lamented in The Wall Street Journal, “The G-7 is in danger of completely losing its way.”

Kudlow highlighted how the host country, France, ignored economic issues when setting the agenda for the late August gathering.

Stunningly, a formal session on economic policy was added only after a last-minute request from the United States.

As Kudlow noted, “Where is the action on growth, trade, energy security, or employment?”

He bemoaned the French decision to abandon consensus-based communiques in favor of abstract “coalitions” based on shared values, a striking departure from the past 45 years of the G-7.

Kudlow urged G-7 participants to focus on a “back to basics” approach to reinvigorating economies, warning that these coalitions “produce politically correct bromides, such as calls to ban everything from straws to fossil fuels,” but not much by way of substantive economic progress.

By contrast, consider the dynamics of what these “values” are that so successfully distracted France and its partners from placing the economy front and center at the world’s preeminent economic forum.

Much of the behind-the-scenes focus revolved around the push for abortion, which explains how economic discussions got relegated to the back seat.

As awareness has grown regarding the intersection between women’s empowerment and the economy—a worthy recognition—so, too, unfortunately, has the push for radical agendas, unrelated to the economy.

In 2018, Canadian Prime Minister Justin Trudeau created a new body, the Gender Equality Advisory Council, and gave it the power to present recommendations on gender issues to the G-7.

That mechanism allows abortion activists to influence participating governments with a veneer of legitimacy, in a bid to build the case for an “international human right” to abortion.

In a show of brazen disregard for governments, the Gender Equality Advisory Council published its recommendations in a 54-page document rife with controversial “reproductive rights” references—and emblazoned with the G-7 insignia, falsely giving the impression of official endorsement.

For the second year in a row, however, the G-7 rejected the recommendations—likely due to the strong pro-life stance of the United States.

The council comprises international abortion activist groups, in addition to a handful of political figures, and even actress Emma Watson.

It was Katja Iversen, president and CEO of the abortion advocacy group Women Deliver, who presented the council’s recommendations to the G-7 on Aug. 25.

In Iverson’s words, “Prime Minister Trudeau really went out on a limb [with the creation of the council]. It seems a little crazy to say that advising G-7 leaders on how to bring about gender equality was a radical idea in 2018. And yet it somewhat was.”

Gender equality notwithstanding, Iverson’s words unintentionally underscored how “crazy” it really is to have an ad hoc body of activists advising governments on abortion at a conference on economic policy.

Unsurprisingly, it appears that the United Nations is a prime mover behind the initiative. The executive director of U.N. Women, one of the United Nations’ most vocal champions of abortion rights, was on hand to urge governments to accept the recommendations.

The insidious implications of U.N. involvement cannot be ignored.

The United Nations is meant to be a platform for the countries of the world to confer, not a body that tells countries what to do. As an agency of the United Nations funded by, and answerable to, its member states, U.N. Women lacks the authority to call on governments to change laws, especially on issues that fall clearly within sovereign jurisdiction.

In its recommendations, the Gender Equality Advisory Council details steps governments should take to make abortion on demand available to all.

Citing a French law, it calls on governments to “prohibit misinformation on abortion when it aims to intentionally mislead women on abortion,” which would effectively be used to ban pro-life support to women considering abortions.

Furthermore, it states that governments should make abortion available “without specific legal specifications on gestational limits” and “covered by insurance in hospitals,” as is done in Canada.

It also calls for radical “comprehensive sexuality education” for minors, among other extremely contentious and divisive proposals.

The efforts of the council make clear that abortion activists will utilize any forum, no matter how incongruous, for the promotion of their agenda.

As Kudlow pointed out, the G-7 ran the risk of leaving the economy almost entirely off its agenda.

While other issues of international concern may have taken center stage, it’s undeniable that the abortion debate raging in the background played a significant role in supplanting economic issues that need and deserve international attention.