The Media Reboots Its Crusade Against Kavanaugh 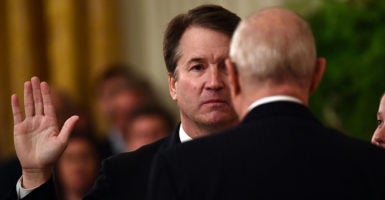 Brett Kavanaugh is sworn in as associate justice of the Supreme Court on Oct. 8, 2018. (Photo: Brenden Sialowski/ Getty Images)

One year ago, the media did the left’s dirty work in dragging Brett Kavanaugh’s reputation through the mud.

Now, they’re back at it again.

It wasn’t two weeks ago that Debra Katz, the attorney for Kavanaugh accuser Christine Blasey Ford, got egg on her face for admitting that Ford’s allegations were motivated by a desire to tarnish Kavanaugh’s reputation. Speaking at a feminist legal conference at the University of Baltimore, Katz said:

In the aftermath of these hearings, I believe that Christine’s testimony brought about more good than the harm misogynist Republicans caused by allowing Kavanaugh on the court. He will always have an asterisk next to his name. When he takes a scalpel to Roe v. Wade, we will know who he is, we know his character, and we know what motivates him, and that is important; it is important that we know, and that is part of what motivated Christine.

That statement proved to be an embarrassment for Ford sympathizers and cast serious doubt on her credibility.

Then, last week, reports surfaced that Ford’s father actually supported Kavanaugh during his confirmation hearing—a fact that went unreported during the hearing, yet would have had a significant impact on the proceedings.

By the end of the week, things were looking pretty bad for those who wished to smear Kavanaugh’s character.

Then, as if on cue, The New York Times stepped in to assail Kavanaugh yet again.

On Sunday, the Times published a new allegation against Kavanaugh based on a forthcoming book, “The Education of Brett Kavanaugh: An Investigation.” The article recounts an uncorroborated claim that Kavanaugh exposed himself and sexually harassed a Yale classmate at a drunken party—separate from a previous but similar allegation.

The Times reports: “A classmate, Max Stier, saw Mr. Kavanaugh with his pants down at a different drunken dorm party, where friends pushed his penis into the hands of a female student.”

Predictably, the story went viral and progressive leaders hit the warpath, with some calling for impeachment.

The only problem: The Times omitted critical pieces of information. The alleged victim refused to be interviewed by the Times, and her friends say she didn’t recall the incident.

The Times admitted that error in an editor’s note, but not before 24 hours had gone by.

And there’s another problem with the story. The man who claimed he witnessed the incident, Max Stier, had a long personal rivalry with Kavanaugh, having served as a defense attorney for President Bill Clinton in the 1990s when Kavanaugh worked on the opposing side with independent counsel Kenneth Starr during the Clinton impeachment. The Times failed to disclose this.

The Times straight up botched this story—there’s no other way to put it. Even MSNBC’s Joe Scarborough pointed out this fact.

This is the same exact pattern we saw last year. As I wrote shortly after the Kavanaugh hearing, the media’s shoddy and slanted coverage during the hearing exposed just how one-sided they are, and how they are crafting news to twist the perception of events to fit a particular narrative.

It was hardly just The New York Times that engaged in this feverish gaggle. The New Yorker, CNN, and The Washington Post played their parts, too.

All of these media “mistakes” go one way—against Kavanaugh. We are fortunate for people like The Federalist’s Mollie Hemingway and a handful of other journalists who didn’t just accept the stories about Kavanaugh without digging on their own and exposing the truth.

The media’s abysmal coverage of Kavanaugh is explained by one simple reality: the political stakes involved with the Supreme Court.

The Supreme Court has taken on an outsized influence in American politics, deciding key questions on abortion, marriage, immigration, and more. The left now looks to the high court for political victory. Kavanaugh’s appointment potentially represented one of the most decisive shifts on the court in a generation.

Once he was appointed, the left and their obvious media allies did everything they could to tarnish his reputation. They feverishly worked around the clock to smear his name because they couldn’t derail his nomination based on his principles and judicial philosophy alone.

When the allegations failed to derail his nomination, the left turned to other proposals to turn the Supreme Court back in their favor–half-baked ideas like packing the Supreme Court or abolishing it entirely.

Now, with the left clearly willing to impeach Kavanaugh, given the opportunity, the media is once again sloppily throw darts at him in the hopes that one will actually stick.

This is a media version of “shoot first and ask questions later,” and it all feeds a progressive base that is committed to removing Kavanaugh by any means necessary. The media has become a critical tool in the left’s political stratagems.

Even after the Times’ latest allegation fell apart, many on the left couldn’t seem to care less. The initial report was all they needed to beat the drum for Kavanaugh’s removal.

Rep. Alexandria Ocasio-Cortez, D-N.Y., did as much when she called for Kavanaugh to be impeached on Twitter, before deleting the tweet and then reposting it.

Vox writer Ian Millhiser jumped in as well, using tortured logic and specious constitutional interpretations to argue that a Supreme Court justice could be removed without an impeachment process.

At this point, it’s obvious that despite all the reporting errors, and despite the media’s eroded credibility, the largest media organizations are committed to doubling down against Kavanaugh until the left can claim victory—whatever that victory looks like.

This article has been corrected to identify Max Stiers as a man.