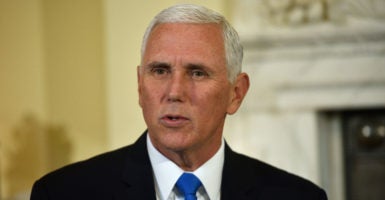 “I couldn’t be more proud to serve as vice president for a president who stands without apology for the sanctity of human life,” Vice President Mike Pence says at Concerned Women for America's 40th-anniversary gala. (Photo: Peter Summers/Stringer/Getty Images)

Vice President Mike Pence said Thursday evening that he doesn’t think he has had “a greater honor than to cast the tie-breaking vote to defund Planned Parenthood.”

The vice president spoke at a gala celebrating the 40th anniversary of Concerned Women for America, an organization that calls itself “the nation’s largest public policy women’s organization” focused on bringing Christian principles into public policy. The gala took place at Trump International Hotel in Washington.

Pence applauded the Trump administration’s efforts to defend the right to life and spoke of his own excitement in defunding Planned Parenthood, saying, “Life and liberty are winning in America again.”

“I don’t know if I have had a greater honor than to cast the tie-breaking vote to defund Planned Parenthood,” Pence said, referring to his March 2017 vote sealing passage of a measure allowing states to withhold federal funds from the organization.

“I couldn’t be more proud to serve as vice president for a president who stands without apology for the sanctity of human life,” Pence added.

The vice president emphasized both his and President Donald Trump’s commitment to abolishing abortion in the United States, saying: “This president will always stand for the unalienable right to life.”

Nance emphasized to The Daily Caller News Foundation that Concerned Women for America’s grassroots volunteer activists conduct themselves with “grace, dignity and kindness,” and that this aspect of their activists is “one of the things that separates us from some women on the left.”

“We are so excited that we were marking a 40th anniversary for Concerned Women for America,” Nance said. “We have a long history of fighting on behalf of life for family, for victims of sex trafficking, for local control of education, for national sovereignty for Israel, and for religious freedom.”

“This is just a wonderful opportunity for our activists, women from around the nation, to come together and just be thankful and joyful for the faithfulness of God and just the impact that together we’ve been able to make a lot of history.”

Nance also expressed gratitude for the conservative figures who spoke at the gala, such as Pence, Huckabee, and Secretary of State Mike Pompeo who was scheduled to speak Friday at a separate luncheon.

“We think that it’s just a great compliment and indicative of the influence that our women have in our nation,” Nance said.