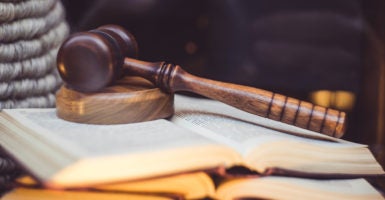 Like the federal government, North Carolina’s regulatory agencies are overzealously creating regulatory crimes. These are crimes defined by executive branch agencies pursuant to authority delegated to them by the legislature.

Most criminal regulations do not cover things we typically consider “criminal” like murder or burglary. Instead, they’re things like providing criminal penalties for violating complex rules for selling bedding or transferring money.

Such activities may seem less serious than traditional crimes, but they can result in equally serious jail time.

As Heritage Foundation scholars have said time and time again, regulatory crimes are a problem. It’s all but impossible for the public to know them all, and yet, as the maxim goes, ignorance of the law is no excuse. You will pay a fine and may go to jail if you accidentally mislabel bedding.

In the case of the federal government, experts estimate that there are more than 300,000 regulatory offenses carrying potential criminal penalties. Americans have been sent to prison for breaking laws they didn’t even know existed and which did not involve inherently blameworthy conduct.

Taking note of this problem, North Carolina passed a law in 2018 that required state and local agencies to report to the legislature all of their rules that carried criminal penalties. Many agencies failed to comply, and so, last month, the state enacted SB 584.

Section 3 of the law sets a new compliance deadline, and Section 5 adds a penalty for noncompliance: Any agency that fails to report to the legislature in a timely manner loses its power to enforce new criminal rules for two years.

Additionally, Section 6 automatically refers all new criminal regulations proposed by state agencies to the legislature’s General Statutes Commission, which will then review them and make recommendations to the general session whether any of the regulations should have their criminal penalties removed.

The law is an excellent first step to getting a handle on runaway regulatory crimes. North Carolina has correctly recognized that regulatory crimes are a problem, that to address that problem it must take inventory of its regulatory crimes, and that the legislature should retain its authority to review and vote on all crimes that the state creates.

For years, The Heritage Foundation has supported efforts to count the federal criminal laws contained both in the United States Code and in the Code of Federal Regulations. The Department of Justice and several non-governmental organizations have tried, and failed, to do so.

But who better than to count criminal regulations than the agencies that promulgated them? And what better way to encourage that effort than to forbid agencies from enforcing new crimes if they don’t comply?

After all, if an agency is unable to count the crimes it has created, it cannot be trusted to enforce more.

Congress should put aside political differences and rally in support of a federal law mirroring SB 584.  North Carolina’s law passed the Republican-majority state legislature with overwhelming bipartisan support and was signed by its Democratic governor.

This is an issue that people on both sides of the aisle can—and often do—agree on. A federal law that requires executive agencies to count their criminal rules wouldn’t just be good policy, it would be a much-needed win for bipartisanship.