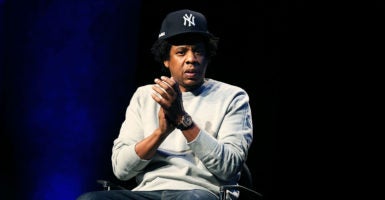 Hip-hop mogul Jay-Z is drawing belated condemnation on Twitter for attributing “adverse feeling for authority” to fatherless households during a panel discussion on social justice earlier this year.

Videos of the rapper—whose given name is Shawn—discussing single-parent households on a race-relations panel recently surfaced and went viral.

In the clip from the January discussion, Jay-Z, 49, remarked that fatherless homes cause boys to rebel against the police and “people to lose lives” when interacting with police.

“You think about the idea of growing up in a single-parent house, which I grew up in … and having an adverse feeling for authority,” said Jay-Z, the first billionaire hip-hop artist and entrepreneur.

“Your father’s gone, so you’re like, ‘I hate my dad. Don’t nobody tell me what to do,” he said. “I’m the man of the house. And then you hit the street, and you run into a police officer, and his first thing is ‘Put your hands up, freeze, shut up … you like … F— you!’”

He added, “That interaction causes people to lose lives.”

Jay-Z’s comments stirred controversy in the face of claims of police brutality against unarmed black men that have spawned national protests and the Black Lives Matter movement, an advocacy group that lobbies for criminal justice reform.

Several Twitter users fired back at Jay-Z, calling his statement “false” and accusing him of “blaming” black people for police brutality.

The rapper hasn’t responded to the criticism he’s received for his remarks.

Another clip of Jay-Z, in the same panel discussion, shows him saying, “We don’t want the people [who are] in charge of the police areas to be in danger, either. We want to be very clear, you know: If someone commits a crime, they should go to jail.”

He also said the broken family structure “affects everyone,” including “hardworking taxpayers” and “police officer families.”

The panel discussion took place Jan. 23 at the John Jay College of Criminal Justice in New York City, where the creation of a new criminal justice organization called the Reform Alliance was announced. The aim of the initiative is to remove “one million people from the criminal justice system within five years.” CNN commentator Van Jones, an adviser to then-President Barack Obama, was named as its CEO.

No stranger to controversy, Jay-Z also drew criticism recently for excluding outspoken former NFL quarterback Colin Kaepernick from his social justice partnership with the league, which was announced on Aug. 13.

Jay-Z is not the only rapper to draw a backlash for raising the problem of single-parent households. Rapper Kanye West, a past frequent collaborator with Jay-Z, addressed fatherless homes and has openly supported President Donald Trump.

During a rant on “Saturday Night Live” on Oct. 5, 2018, West said, “The blacks want always Democrats … you know, it’s like the plan they did, to take the fathers out the home and put them on welfare … . Does anybody know about that? That’s a Democratic plan.”

West also received criticism on Twitter for his support of Trump.