Pension Bailout Bill Would Only Worsen the Underfunding Crisis 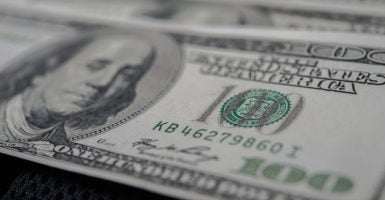 A newly proposed pensions bailout bill would cost taxpayers $100 billion—the equivalent of a new $600 tax on every worker in the U.S. (Photo: Prakasit Khuansuwan/EyeEm/Getty Images)

A friend of mine recently had the unfortunate experience of dealing with multiple abscessed teeth in her children.

These abscesses occurred because a neglectful dentist had “treated” her kids’ cavities by concealing them with quick, painless fixes instead of drilling down and eliminating the root of the problem.

In the end, the kids had to undergo much more intense, expensive, and painful treatments than if their cavities had been properly treated to begin with.

The Congressional Budget Office has recently found that Congress’ so-called “solution” to a $638 billion multiemployer pension crisis would similarly exacerbate the situation—but without the benefit of Novocain.

On July 24, the House of Representatives passed H.R. 397, the Rehabilitation for Multiemployer Pensions Act. (The same day, a group of senators reintroduced a similar bill, the Butch Lewis Act, named after a well-known union and pension activist.)

The bill, or a similar pension bailout, could be tied to must-pass legislation this fall or early in 2020.

The bill by itself would cost taxpayers more than $100 billion, according to the Congressional Budget Office. The first component would contain about $35 billion in loan costs.

Under the bill, the Congressional Budget Office estimates that a new pension rehabilitation administration would provide $39.7 billion in loans, of which taxpayers would recoup only $7.4 billion in interest and loan repayments. That’s equivalent to a roughly 80% default rate.

In addition, already insolvent plans would receive $3.6 billion in loans that they likely could not repay.

Although the bill includes some offsetting revenues, or “pay fors,” all but about $6 billion of that revenue is unrelated to the bill’s purpose, and some of those revenues have already been claimed by bills the House previously passed.

The bill’s total cost of $100 billion—the equivalent of a new $600 tax on every worker in the U.S.—is a huge sum of money, particularly for a Band-Aid solution.

In a Sept. 6 letter from the Congressional Budget Office to the Senate Budget Committee, the agency noted that even if more than $100 billion in taxpayer funds were given to a select group of pension plans, only a small portion of those plans could repay their loans, and most plans receiving assistance would still become insolvent.

But even that costly and ineffective assessment only scratches the surface of the pervasive multiemployer pension crisis. That’s because only 139 pension plans would be eligible for taxpayer assistance.

According to the Pension Benefit Guaranty Corporation, there are 1,374 multiemployer, or union, pension plans across the U.S., meaning only about 10% of them would qualify for assistance under this bill.

Yet, a whopping 96% of multiemployer pension plans are less than 60% funded, and collectively, they are on track to be able to pay out only 42 cents of every dollar in promised benefits.

While the proposed pension bailout reduces apparent costs by limiting assistance to only a small portion of the most deeply troubled plans—those considered critical and declining in 2019—it leaves hundreds of other multiemployer plans that will become insolvent at later dates looming for subsequent bailouts by future Congresses.

If policymakers are going to provide a taxpayer bailout, the least they could do is fix the problems that led to employers and unions promising $638 billion more than they set aside to pay workers.

But instead of improving the solvency of plans and preventing future underfunding, the bill would incentivize plans to become even more underfunded so that they could push their broken promises onto taxpayers.

The Congressional Budget Office notes the incentives of the bill, such as plans changing their discount-rate assumptions in order to qualify for taxpayer assistance.

And it’s unlikely that future Congresses would withhold assistance from plans that become insolvent after the bill’s enactment, because excluded plans would argue that’s “unfair.”

Thus, the roughly 1,200 plans that wouldn’t initially qualify for assistance would nevertheless anticipate a future bailout and continue to promise benefits without setting aside the funds to pay them.

Treating all multiemployer pension plans equally could lead to a taxpayer bailout in excess of $638 billion for private-sector pensions and an additional $4 trillion to $6 trillion for state and local pensions.

In short, this is a terrible deal for taxpayers, and it’s no good for pensioners—particularly younger ones—who will still end up with insolvent pension plans.

But it’s great for unions and employers who wouldn’t have to pay for their broken pension promises and could instead walk away with a lobbying victory to report to their dues-paying union members.

A bailout without reform is no solution and would only make problems worse.

Instead, Congress should enact these 12 reforms to protect workers and retirees without forcing taxpayers to pay for private union pensions’ broken promises—and without setting a precedent for federal bailouts of nonunion private pensions and state and local pensions.