Free Speech Is Dying in Britain. Here’s Why the US Has Kept It. 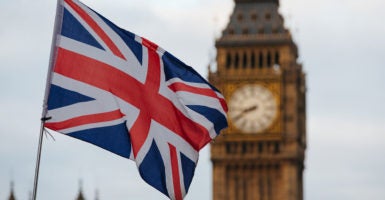 "In Britain, our freedom—or lack of it—is now defined by what we cannot say, which is just about anything," writes Anglican priest Jules Gomes. (Photo: RistoArnaudov/Getty Images)

“Freedom is never more than one generation away from extinction,” President-to-be Ronald Reagan warned in an address to the Phoenix Chamber of Commerce in March 1961.

That’s because, now as then, slavery not liberty, and serfdom not freedom, is humanity’s default setting.

Those of us in Britain have seen the fulfillment of Reagan’s prophecy. We sleep-walked into slavery, and it’s in the domain of speech that the death of our freedom is most pronounced. We hate “hate speech,” but don’t love free speech anymore.

In “Areopagitica,” John Milton’s seminal essay on free speech, the poet understood freedom of speech as the freedom defining all others, calling for “liberty to know, to utter, and to argue freely, according to conscience, above all liberties.”

“In a free society of free citizens, speech is the medium and proof of freedom itself,” concurred Michael Walsh, author of “The Devil’s Pleasure Palace: The Cult of Critical Theory and the Subversion of the West.” In contrast, he added, an “unfree society” is noteworthy “for what you cannot say.”

In Britain, our freedom—or lack of it—is now defined by what we cannot say, which is just about anything.

Dr. David Mackereth, a physician with 26 years’ experience in Britain’s National Health Service, was sacked because he wouldn’t refer to a hypothetical “six-foot-tall bearded man” as “madam.”

As Walsh has observed, Britain has become notorious for what you cannot say, which is just about anything that might offend blacks, women, Muslims, non-heterosexuals, dwarfs, or student snowflakes.

By contrast, America is noteworthy for free speech, or at least waging a civil war to protect speech.

>>> The Rise of ‘Hate Speech’ Policing in Europe

The closest thing Britons have to a First Amendment is the fuzzy Article 10 of the European Convention of Human Rights, which says in part, “Everyone has the right to freedom of expression. This right shall include freedom to hold opinions and to receive and impart information and ideas without interference by public authority and regardless of frontiers.”

However, the second clause qualifies—and sharply curtails—those freedoms, noting that the exercise thereof “carries with it duties and responsibilities” and subjects that exercise “to such formalities, conditions, restrictions or penalties as are prescribed by law and are necessary in a democratic society, in the interests of national security, territorial integrity, or public safety, for the prevention of disorder or crime, for the protection of health or morals”—and perhaps mostly tellingly—“for the protection of the reputation or rights of others.”

British legal scholars recognize the dissonance between the freedom granted by the First Amendment and the restrictions imposed by Article 10. Yet British academics such as David Feldman argue that “[t]he First Amendment cannot be planted here successfully without changing both law and society, and changing it for the worse.”

Feldman’s caricature stems from his inability to trace the source of “liberty” in the Bill of Rights. That is the fundamental fissure in the way our two peoples, separated by one language, do political theory.

Despite our common law heritage, deeply rooted in Christianity, secular Britons such as Feldman insist that “[l]egal and constitutional rights derive their authority ultimately from acceptance by society or a legislative or judicial body acting on its behalf.”

Put another way: Government giveth, and government taketh away.

He writes that Britain’s “doctrine of parliamentary legislative supremacy gives Parliament a considerable—perhaps unlimited—capacity to interfere with rights of all sorts. … This is true, also, of the European Convention on Human Rights. … This is not something with which we feel uncomfortable.”

In contrast, Americans speak of “inalienable rights” that come from God, not government. The state’s duty is to protect those rights. The Preamble of the U.S. Constitution defines the end of government as being to “secure the blessings of liberty to ourselves and our posterity.”

The point of departure for the American concept of freedom is not individualism, but religion. The settlers migrated to the New World to freely pursue their preferred forms of religion.

French diplomat Alexis de Tocqueville went so far as to declare that, for Americans, religion was to be “considered the first of their political institutions.”

Ironically, as Tocqueville knew only too well, it was the separation of church and state that made religion such a powerful force in America. Conversely, national or established churches in continental Europe and in Britain played their part in domesticating Christianity.

By contrast, America’s Founding Fathers were men of both reason and religion. Steeped in the biblical tradition, many recognized a divine guidance not only in their personal lives, but also in national life, even though some were not orthodox Christians.

After a recent trip to the U.S., I recalled Alastair Campbell’s famous 2003 quip. “We don’t do God,” the spin doctor to then-Prime Minister Tony Blair told the nation when asked whether the prime minister and President George W. Bush prayed together.

That’s why, for some of us in Britain, the U.S. continues to be, in Lincoln’s words, “the last best hope of earth.”