Why Trump Was Right to End Taliban Talks 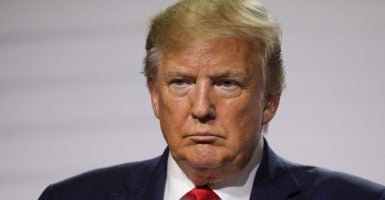 President Donald Trump canceled talks with the Taliban after a U.S. soldier was killed in a bombing in Kabul, Afghanistan. (Photo: Ludovic Marin/AFP/Getty Images)

Cal Thomas is a syndicated columnist, author, broadcaster, and speaker with access to world leaders, U.S. presidents, celebrities, educators, and countless other notables. He has authored 12 books, including his latest, “What Works: Common Sense Solutions for a Stronger America.” Readers can email him at [email protected]

PARIS—President Donald Trump was right to cancel a “secret” meeting with leaders of the Taliban and the Afghan government following two bomb attacks by the terrorist group that killed 10 civilians, an American soldier, and a Romanian service member in heavily fortified Kabul.

The president is eager to fulfill a desire to withdraw remaining American forces in what has been one of America’s longest wars. Who isn’t?

Unfortunately, terrorism does not fall under a single umbrella. It is not just al-Qaida, though all Islamist terrorist groups appear to have the same objective: Kill Americans, weaken the United States, subjugate women, eliminate Israel, and impose its version of Sharia law across the globe.

The prospect of a peace agreement would normally be cause for celebration, except in this case U.S. negotiators don’t appear to know who and what they are dealing with.

As he ended American involvement in the Vietnam War with the Paris Peace Accords, President Richard Nixon declared “peace with honor.” It wasn’t long before the communist North’s takeover of South Vietnam and their murder of “collaborators.”

A premature U.S. pullout from Afghanistan will fulfill the late Osama bin Laden’s prophecy, which he based on America’s Vietnam experience, that the U.S. has no staying power and all the terrorists have to do is wait us out.

A Taliban spokesman confirmed this in a statement to the London Times, declaring the group’s unwillingness to even agree to a ceasefire, much less a peace deal.

“It is not possible for us,” he said. “We will fight. We have fought for 18 years and we will fight for a hundred years. We will continue our ‘jihad.'”

There is something else the secular West doesn’t, or worse, refuses to understand. As with some liberal Western leaders who thought promises from communists could be believed, radical Islamists are taught to lie to “infidels,” if it advances the cause of Islam.

“According to Sharia (law), in certain situations, deception—also known as ‘taqiyya,’ based on Quranic terminology—is not only permitted but sometimes obligatory. For instance, contrary to early Christian history, Muslims who must choose between either recanting Islam or being put to death are not only permitted to lie by pretending to have apostatized, but many jurists have decreed that, according to Quran 4:29, Muslims are obligated to lie in such instances.”

The Taliban leadership can be counted on to say to the West whatever it takes to regain power and to possibly again create a haven for terrorists to plot their next attack on the United States.

The West should never compromise when it comes to the Taliban’s attitude toward women and its desire to return to the days of their complete subjugation to men.

Some years ago I met with a group of Afghan women in New York, who had managed to escape their country when the Taliban ruled. They included teachers, lawyers, and businesswomen.

These women told horrific stories of life under the Taliban. They were forced to paint over the windows of their homes, forbidden to leave home unless accompanied by a male relative, required to wear burqas in public, and should they take a bus anywhere, a male relative had to take the coin from their hands and deposit it in the collection box.

There is no reform movement among the Taliban, so why doubt the group will return to practicing their interpretation of Islamic law should they have the opportunity?

One hopes the U.S. will not consider anything resembling unilateral withdrawal, which is not the way to end a war. Victory is.

The “war on terrorism” is unique because it is based on religious extremism and its accompanying ideology and a willingness—even eagerness—to die for their cause and their god.

Should a peace deal eventually be reached without protections that preserve U.S. interests (and American lives), it will only ensure more trouble for the years ahead.