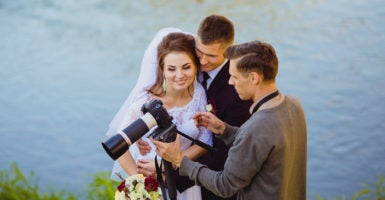 The state of Minnesota tried to force the Larsens, not pictured above, to make films promoting same-sex marriage in violation of their sincerely held religious beliefs.(Photo: meatbull/Getty Images)

This decision has enormous implications for other similar cases around the country—and as always, it could reach the Supreme Court upon appeal.

On Aug. 23, the 8th Circuit Court of Appeals ruled in Telescope Media Group v. Lucero that a lower court should not have dismissed the lawsuit of Carl and Angel Larsen—a film-making couple from Minnesota who claimed the state was forcing them to violate their sincerely held religious beliefs.

Minnesota claimed that it could control their artistic expression by forcing them, and other creative professionals, to produce custom work promoting same-sex marriages in addition to traditional marriages. State officials said this is what state non-discrimination law required.

Penalties for violation of the law include paying a civil penalty to the state, triple compensatory damages, punitive damages of up to $25,000, a criminal penalty of up to $1,000, and even up to 90 days in jail.

Thus, the complaint reads, “[S]olely because of Minnesota law, the Larsens are refraining from exercising their First Amendment right to publicly promote their cinematic, story-telling services for weddings, and to film and tell stories that promote and magnify the historic, biblically-orthodox definition of marriage as a union between one man and one woman.”

The Larsens sued the state of Minnesota, with Alliance Defending Freedom attorneys filing on their behalf.

In its ruling, the 8th Circuit sided with the Larsens and reinstated their rights to free speech and free exercise of religion. The opinion gives a powerful defense of First Amendment liberty and addresses some of the free speech issues left open by the Supreme Court in Masterpiece.

In its opinion, the court asked, “Can Minnesota require to produce videos of same-sex weddings, even if the message would conflict with their own beliefs?”

The lower court had said yes, but the 8th Circuit disagreed:

Because the First Amendment allows the Larsens to choose when to speak and what to say, we reverse the dismissal of two of their claims and remand with instructions to consider whether they are entitled to a preliminary injunction.

The opinion went on to point out just how slippery the slope would be if Minnesota prevailed in the case.

Under its own logic, Minnesota could use the state Human Rights Act “to require a Muslim tattoo artist to inscribe ‘My religion is the only true religion’ on the body of a Christian if he or she would do the same for a fellow Muslim, or it could demand that an atheist musician perform at an evangelical church service.”

In fact, if Minnesota were to do what other jurisdictions have done and declare political affiliation or ideology to be a protected characteristic, then it could force a Democratic speechwriter to provide the same services to a Republican, or it could require a professional entertainer to perform at rallies for both the Republican and Democratic candidates for the same office.

This ruling begins to answer some of the biggest questions being asked in light of the LGBT political agenda: Will businesses and artists have to endorse things they disagree with? Will free speech and religious liberty continue to flourish in a post-Obergefell world?

This ruling gives a hopeful outlook. Jeremy Tedesco, senior counsel for Alliance Defending Freedom, expressed how important this case is for religious liberty:

This is a significant win. The government shouldn’t threaten filmmakers with fines and jail time to force them to create films that violate their beliefs. … That’s why we’re pleased that the 8th Circuit has affirmed that the Larsens’ films are fully protected speech and that the state lacks a compelling interest to force them to express messages through their films that violate their deeply held convictions.

This ruling establishes a precedent that will likely bear upon similar cases in lower courts around the country. It also offers the Supreme Court a clear legal rationale for handling similar cases, which are sure to arrive in the years ahead.