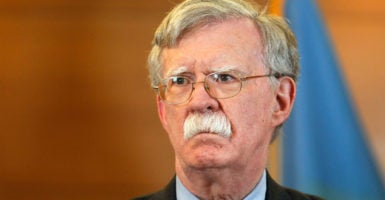 John Bolton, pictured in Ukraine in August, was a powerful force for American exceptionalism and leadership as national security adviser. (Photo: STR/NurPhoto/Getty Images))

John Bolton served with distinction as President Donald Trump’s national security adviser and significantly strengthened the strategic posture and outlook of the United States as the world’s superpower.

Bolton advanced a clear-eyed approach to dealing with the myriad threats facing the United States today and was uncompromising in his view that the U.S. must project strength and resolve in confronting its enemies.

A big-picture strategic thinker with decades of foreign-policy experience who frequently challenged conventional wisdom, Bolton was a powerful force for American exceptionalism and leadership as national security adviser. He played a leading role in advancing Trump’s “America First” approach to foreign policy.

Bolton was at the forefront of the president’s policy of maximum pressure against the Iranian regime, which has succeeded in bringing the world’s leading state sponsor of terrorism to its knees economically.

Under Bolton’s leadership at the National Security Council, combined with that of Mike Pompeo at the State Department, Iran’s capacity to conduct terrorism abroad, intervene in foreign wars, and build its military capability has been undermined.

Bolton was an early supporter of the U.S. withdrawal from the disastrous Iran nuclear deal (Joint Comprehensive Plan of Action) negotiated by the Obama administration. As national security adviser, he was at the forefront of ensuring that this hugely flawed deal cannot be revived by Tehran.

Bolton was also instrumental in shaping the U.S. response to the Venezuela crisis and a host of other international issues, from confronting Russian aggression in Europe and the Middle East to pressuring NATO allies to invest more in the common defense.

Bolton rightly placed strengthening the transatlantic alliance at the very heart of strategic thinking in the White House and was a powerful adversary for Vladimir Putin’s Russia. He consistently stood up to Russian aggression and threats to Europe and made it clear at every opportunity to the Kremlin that the United States would stand with and defend its allies in the face of the Russian bear.

U.S. leadership in Asia was also bolstered under Bolton, and his support for Taiwan helped lead to the best U.S.-Taiwan relationship in 40 years. And he was at the forefront of the Trump administration pushing back on Chinese designs in the Indo-Pacific in ways that strengthened America’s presence and credibility.

As national security adviser, Bolton was a staunch defender of the fundamental importance of national sovereignty and self-determination, and was a prominent backer of Britain’s exit (Brexit) from the European Union and the U.S.-U.K. “special relationship.”

Bolton understood the tremendous importance of Brexit to the United States and offered his full backing to British efforts to free itself from the shackles of the European Union. He was a great friend for Britain in the White House and a key architect of the United States’ overall approach to dealing with the European Union under Trump, which represented a significant shift away from the “Euro-federalism” of the Obama administration.

Bolton leaves the White House in a stronger position to meet the challenges facing the United States today. He led the National Security Council with resolve and determination at a time when the enemies of the free world seek to harm the United States, its allies, and global security on several fronts.

He was uncompromising in his view that powerful American leadership matters on the world stage and that the United States must work closely with its key allies to advance U.S. interests.

Bolton will be remembered as one of the most effective national security advisers of recent times and leaves a powerful legacy after serving his country in the White House.