If California Relies on Obama School Discipline Policy, It Will Put Students at Risk 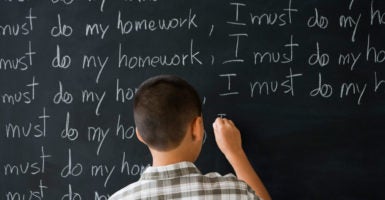 California lawmakers have decided that schools should not suspend, and in some cases expel, students for disrupting school activities. (Photo: Getty Images)

California legislators seek to expand a law that limits a teacher’s ability to keep order in the classroom.

Surveys find opposition to such loosened policies, and research demonstrates that ideas such as these may put students at risk and even limit student achievement. The provisions also dredge up painful questions about the relationship between recent school shootings and student discipline policies.

Under the proposal (SB 419) that legislators passed and sent to Gov. Gavin Newsom for his signature, California schools may not suspend students in grades 4 through 8 for having “disrupted school activities or otherwise willfully defied the valid authority” of school personnel.

The measure also amends existing law to say that educators cannot expel high school students on these grounds, and applies all of the new provisions to charter schools as well as regular public schools. Existing law already limits the use of suspension for students in grades K-3.

Research finds that such policies can be harmful to students. Studies from Florida and Philadelphia found that leaving troubled or disruptive students in a classroom is related to negative academic outcomes for the peers of offending students.

Media reports point to data showing that minority students in California are suspended for “defiance” at higher rates than their peers. Advocates of the change say these disparities are enough reason to limit the ways in which teachers and school officials address student misconduct.

However, research has not determined the causes for these disparities and has found other ethnic and gender differences in student discipline.

For example, a 2017 study of North Carolina schools found that black boys were less likely to be suspended by black teachers, but researchers said the data did not allow them to determine why. Others have pointed to national data showing that white students are disciplined more than Asian students, and that teachers discipline boys more than girls.

Variables such as violence in a student’s neighborhood or home also could be contributing factors to why some students act out more than others.

Researchers from the University of Pennsylvania and Mathematica Policy Research have suggested violent neighborhoods or gang activity concentrated in urban areas could be involved. They said “the greater frequency of violations among minority students could be caused by factors outside of the school’s purview, such as more exposure to poverty, crime, and life trauma resulting from residential and economic inequality.”

In 2016 and 2018, nationally representative surveys administered by Education Next found that more than half of respondents opposed school district policies limiting suspension and expulsion.

This topic has garnered more attention because of the school discipline policy in place when a former student took the lives of 17 students and teachers in February 2018 at Marjory Stoneman Douglas High School in Parkland, Florida.

Education officials in Broward County, which includes Parkland, had instituted a policy that limited teachers’ and other educators’ ability to suspend or expel students—similar to the California proposal.

Heritage Foundation research last year showed that the Parkland tragedy involved individual and institutional lapses at more than one public agency, but Broward County’s school discipline policy kept turning up during the course of investigations into the causes and ensuing recommendations.

And because Broward County’s policy resembled—perhaps even inspired—Obama-era policy on school discipline, proposals to limit a teacher’s choices over how to manage his classroom deserve rigorous evaluation.

Former California Gov. Jerry Brown, like Newsom a Democrat, more than once vetoed legislation similar to the bill sent to his successor. In his 2018 veto letter, Brown wrote: “Teachers and principals are on the front lines educating our children and are in the best position to make decisions about order and discipline in the classroom. That’s why I vetoed a similar bill in 2012.”

The Federal Commission on School Safety’s final report last December recommending the rescission of the Obama administration policies had a similar analysis:

“Teachers are often best positioned to identify and address disorderly conduct at school,” the report said. “They have an understanding of the students entrusted to their care and can see behavioral patterns on an ongoing basis.”

California’s governor and lawmakers should reconsider teacher and school leaders’ efforts to protect children. Limits such as these on an educator’s ability to choose how to maintain order in the classroom puts all students at risk.