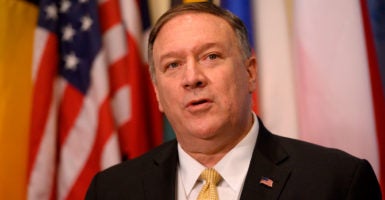 “We all understand that this was Ukrainian territory, and our mission set couldn’t be clearer,” Secretary of State Mike Pompeo tells The Daily Signal. Pictured: Pompeo speaks to reporters Aug. 20 after a United Nations Security Council meeting in New York. (Photo: Johannes Eisele/AFP/Getty Images)

“We made very clear our position with respect to the Russian role there in Ukraine,” Pompeo said of that reprimand, speaking to The Daily Signal by telephone.

“We know, Europe knows, we all understand that this was Ukrainian territory, and our mission set couldn’t be clearer,” he said.

A readout of Pompeo’s Crimea Declaration in July 2018, posted on the State Department website, says: “The United States rejects Russia’s attempted annexation of Crimea and pledges to maintain this policy until Ukraine’s territorial integrity is restored.”

Days after Ukraine’s February 2014 pro-Western revolution, Russia troops invaded Crimea. Caught off guard, Ukrainian forces ceded the territory without a fight. A referendum held in Crimea that March approved the territory’s accession to the Russian Federation.

The United Nations General Assembly subsequently declared the referendum invalid. In turn, the U.S. and the European Union levied punitive sanctions on Moscow; the G-8 bloc of countries booted Russia from its ranks, becoming the G-7.

Trump’s statements spurred some media commentators to speculate whether the U.S. had shifted its stance on Crimea—a notion that Pompeo rejected.

“Go read the Crimea Declaration. It stands. It’s the most crystal-clear articulation of this administration’s policy,” Pompeo told The Daily Signal.

Pompeo emphasized, however, that maintaining dialogue with Russia was necessary to end the war in Ukraine and that Russian cooperation was valuable in other joint ventures such as counterterrorism.

I am confident that we saved American lives as a result of that close cooperation and the work that we did together. I’m equally confident that we’ve saved Russian lives as well and, frankly, lives of citizens from all across the world, by sharing our efforts on counterterrorism.

In every relationship there is an element that says these are the things that we disagree on, [and] these are the places that we can find a set of overlapping interests even though our values are deeply different.

Russia launched a hybrid warfare invasion of Ukraine’s eastern Donbas region in April 2014. That summer, thousands of Russian regulars outright invaded eastern Ukraine, fighting to a draw that fixed the war along its current contact line.

Despite a February 2015 cease-fire known as Minsk II—named after the Belarusian capital where the accord was signed—the war never ended. More than half of the conflict’s roughly 13,000 fatalities occurred after the Minsk II cease-fire went into effect.

It’s a bizarre conflict, in which neither side is fighting to achieve a breakthrough. Rather, both sides simply hold their lines while weathering daily shelling and sniper fire for the sake of not backing down first.

The so-called Normandy Format is a negotiating framework comprising representatives from Ukraine, Russia, Germany, and France. The group has met multiple times since 2014 in unsuccessful attempts to hammer out a durable peace deal for eastern Ukraine.

“We are hopeful that new leadership in Ukraine will open a new chapter in this conversation. They can get us to a better outcome … deliver what President Trump has set out as our series of objectives there,” Pompeo told The Daily Signal.

Zelenskyy’s overtures for peace talks with Russia have garnered negative reactions from some quarters in Ukraine—including among combat veterans. Others say, however, that there’s no military solution to the conflict and a negotiated peace with Russia is the only way to finally end the bloodshed.

“I hope the situation with the new president will change for the better,” said Yevhen Shevchenko, who served in the Donbas war zone in a Ukrainian volunteer battalion from 2014 to 2015.

The U.S. is not party to the Normandy Format talks and Pompeo said he wouldn’t “speculate” on whether the U.S. would play a more direct role in peace talks should the current negotiations fail.

During an interview with Radio Free Europe/Radio Liberty while in Kyiv, Bolton said Zelenskyy shouldn’t “rush” into a peace deal with Putin.

“I don’t think there is any reason to rush it into one course of action or another. … I think working this through over a period of time makes sense for the new government in Ukraine,” Bolton said.

For the time being, the U.S. policy is to give Zelenskyy’s administration a fair shot at breaking the impasse with Moscow within the existing negotiating framework.

Pompeo, for his part, said he was optimistic that Zelenskyy can “re-energize” the peace process.

“We’re very engaged in trying to find the right set of outcomes. We hope that this can be resolved. We do hope, too, that [the] Normandy Format will be re-energized by this change in leadership in Ukraine,” Pompeo said, adding that the onus of de-escalation was on the Russian side.

“We think a good start on that would be to return the 24 sailors who are held,” the secretary of state added, referring to 24 Ukrainian sailors taken prisoner by Russia last November during a naval confrontation at the Kerch Strait.

The captured sailors’ release remains a key roadblock for prospective Russo-Ukrainian peace talks. Yet, according to Ukrainian and Russian news reports, the two sides are zeroing in on a prisoner exchange deal and an agreement could be struck any day.

“We think there’s lots of places we can begin to break away at the logjam, and I hope we get there. We’re certainly working towards that end,” Pompeo said.

While the fighting continues, the land war in the Donbas is relatively quarantined from the rest of Ukraine by the Minsk II cease-fire.

The physical effects of combat extend only as far as the range of the weapons used. However, Russian cyberattacks, propaganda, sabotage, and targeted assassinations affect the entire country.

Beyond the Donbas warzone, Ukraine has fortified its southern seaboard against the threat of a Russian amphibious invasion. Russia has about 77,000 troops deployed along its border with Ukraine capable of launching an armored invasion. About 40,000 Russian troops are garrisoned in Crimea, according to Ukrainian military reports.

To defend against the Russian threat, Ukraine has rebuilt its army into Europe’s second largest in terms of manpower. Ukraine’s armed forces now comprise about 250,000 active-duty troops. On the Continent, only Russia has more soldiers in uniform than Ukraine.

“A powerful combat-capable army is a priority,” Zelenskyy told a meeting of top Ukrainian defense officials and politicians Monday.

The U.S. maintains a military training operation in Western Ukraine and has stepped up military aid to Kyiv since Russia’s 2014 invasion.

However, according to recent media reports, Trump was reviewing a $250 million military aid package to Ukraine, stalling its delivery.

“We are constantly reviewing our policy to make sure that every taxpayer dollar we spend leads to an outcome that’s in America’s best interest,” Pompeo told The Daily Signal.