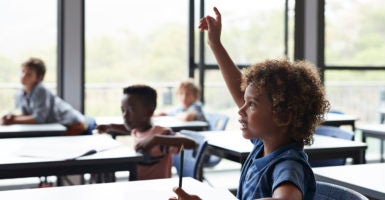 In the U.S., family circumstances and schools are closely linked. This effectively limits the prospects of upward mobility for millions of children. (Photo: Klaus Vedfelt/Getty Images)

What social institutions have the most immediate and strongest impact on a child’s development and well-being? According to researchers for the Pew Charitable Trust’s Economic Mobility Project, it’s the child’s family circumstances, with schools ranking as the second-most important factor.

In the U.S., family circumstances and schools are closely linked, because most cities and counties link schooling to housing. The extent to which families can select schools is largely determined by the extent to which they can afford to select their neighborhood.

This arrangement effectively limits the prospects of upward mobility for millions of children across the country.

In 2013, the real estate brokerage firm Redfin analyzed more than 400,000 home sales. It found that, on average, families paid $50 more per square foot for houses in highly rated school districts.

In one case, Redfin found a house priced $130,000 more than its “twin” (in terms of square footage and number of rooms) less than a mile away. The main difference? The first was in a highly rated school district; the other was not.

Although the Redfin study did not control for other potential confounding variables, its findings underscore what we all already know: Housing choice is school choice.

Many of the country’s largest school districts give families no alternative to the nearest public school. They offer no charter schools, no school vouchers–no school choice programs of any kind.

Instead, kids are consigned to a dysfunctional school.

Yet parents in large public school districts often have even bigger concerns than whether Johnny can read. They’re worried more about their children’s safety. And with good reason.

From September through December last year, Chicago Public Schools dealt with more than 600 allegations of sexual violence. In the year before that, 10% of high school students in Washington, D.C., public schools were threatened or injured with a weapon on school property.

Nationwide, the National Center for Education Statistics reported more than 827,000 incidents of crime among students aged 12 to 18, including sexual assault, robbery, and theft.

Upward mobility doesn’t just require that schools keep students safe and teach them to read; it requires that schools imbue students with that cultural currency that will enable them to be productive members of a free society.

Here, too, many public schools are failing. Today, one-third of Americans–the vast majority products of our public schools–cannot name a single branch of government.

Nor is an uptick in civic literacy visible anywhere on the horizon. Instead, public schools seem more interested in introducing their pupils to leftist ideology than in teaching basic civics.

Unsurprisingly, California is leading the way in this endeavor.

After introducing a much-derided sex education framework earlier this year (with no opt-out for families), the Golden State has now introduced an ethnic studies curriculum that brings the social justice warrior mentality of grad schools to grade schools.

Williamson Evers of the Hoover Institution calls it training for “ideological activists and proponents of identity politics.”

Inez Stepman of the Independent Women’s Forum wrote that with its references to terms like “cis-heteropatriarchy” and its broadside against capitalism, the curriculum “reads as though ripped from a Berkeley seminar on ‘critical whiteness studies.’”

All this while, as my colleague Jonathan Butcher points out, 57% of California’s black fourth-graders cannot read at even a basic level.

These disappointing outcomes support the notion that public education is actually hindering upward mobility for its students.

When government assigns children to schools that are failing every test of quality–safety, learning, and civic literacy–it is saddling those kids with lifetime opportunity costs.

Yet it need not be that way.

School choice programs allow students to attend schools that meet their learning needs. And studies show that when students avail themselves of these options, they develop better both academically and as citizens (as measured by things like political tolerance and civic engagement). Their parents are more satisfied as well.

A near-monopoly education system that denies students access to schools that would better serve them impedes upward mobility in America. It will not get better until we separate housing from schooling, through universal education choice.