US Must Contain Chinese Influence Rising in the United Nations 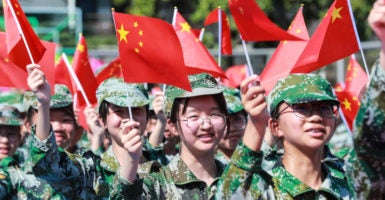 As China becomes more powerful economically and militarily, its influence and presence in the United Nations will likewise grow. Pictured: New students wave Chinese national flags to celebrate the 70th anniversary of the founding of the People's Republic of China on the playground during military training at No. 4 middle school on Aug. 26 in Deqing, Zhejiang Province of China. (Photo: Wang Zheng/VCG/Getty Images)

Chinese influence is on the rise within the United Nations system. Qu Dongyu became director general of the Food and Agriculture Organization this month, raising the number of Chinese nationals leading a U.N. specialized agency to four.

This trend is concerning, because China is not a benign force internationally. It is seeking to shift the values, programs, and policies of the U.N. in ways that benefit Chinese priorities and ideology and that undermine the values and practices that have underpinned the international system for decades.

These last three appointments–all of whom continue to lead their organizations–occurred under President Obama’s watch.

In short, Chinese influence in the United Nations was rising well before Trump entered the Oval Office. Regardless of why this development is now receiving attention when it did not under the previous administration, it is a legitimate concern deserving notice and response.

As Chinese influence has grown, so has its ability to assert policies at odds with American interests or designed to blunt U.N. mechanisms deemed troublesome or problematic by China.

For instance, China has used its veto to block U.N. Security Council resolutions only 12 times since 1971, when the United Nations recognized the People’s Republic of China as the official government. All but three of those vetoes occurred since 2007.

Moreover, those vetoes were cast to protect repressive governments in Burma, Syria, Venezuela, and Zimbabwe from U.N. sanctions and condemnation for their abuses.

Since 2013, China has become increasingly assertive in U.N. human-rights institutions, promoting “its own interpretation of international norms and mechanisms,” according to a study by the Brookings Institution. Human Rights Watch has reported Chinese officials intimidating U.N. staff in violation of U.N. rules and harassing non-governmental organizations critical of Chinese policies.

In addition, China expects its nationals working in international organizations to advance Chinese interests and policies, even though international civil servants are supposed to be neutral and independent. In October 2018, China arrested the president of Interpol, Meng Hongwei, and charged him with abuse of power and refusing to “follow party decisions.”

Knowing the potential consequences of not following Beijing’s orders, it’s no wonder Fang Liu has used her leadership position at the International Civil Aviation Organization to impede Taiwanese efforts to attend the agency’s meetings, despite Taiwan being a major air traffic hub.

As China becomes more powerful economically and militarily, its influence and presence in the United Nations will likewise grow. The U.S. cannot reverse this trend entirely, which is based on political and financial realities.

Given China’s priorities, however, the U.S. and like-minded nations cannot neglect the ramifications of this trend.

The U.S. must take strategic steps to ensure that Chinese influence is reasonably contained and its leadership restricted and channeled to the parts of the organization that do not directly undermine U.S. interests.