EXCLUSIVE: Pompeo Says US ‘Delivered’ on Mission in Afghanistan 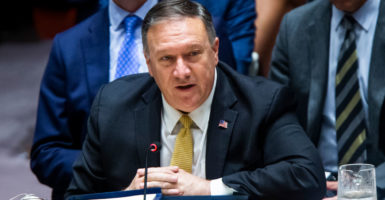 "Today, al-Qaeda … doesn't even amount to a shadow of its former self in Afghanistan,” Secretary of State Mike Pompeo tells The Daily Signal. Pictured: Pompeo speaks during an Aug. 20 meeting of the U.N. Security Council in New York City. (Photo: Eduardo Munoz Alvarez/Getty Images)

KYIV, Ukraine—With the U.S. inching toward a peace deal with the Taliban, Secretary of State Mike Pompeo says the nation has “delivered” on its original mission in Afghanistan—to prevent al-Qaeda militants from using the country as a safe harbor to plan and execute terrorist attacks.

“If you go back and look at the days following 9/11, the objectives set out were pretty clear: to go defeat al-Qaeda, the group that had launched the attack on the United States of America from Afghanistan. And today, al-Qaeda … doesn’t even amount to a shadow of its former self in Afghanistan,” Pompeo told The Daily Signal in an exclusive interview.

“We have delivered,” the secretary of state added in the telephone interview.

America and allies invaded Afghanistan on Oct. 7, 2001, weeks after the 9/11 terrorist attacks. The war’s original goals of toppling the Taliban regime and bringing Osama bin Laden and al-Qaeda to justice morphed over the intervening 18 years into a counterinsurgency campaign against the Taliban and a broader democracy-building exercise.

Despite the shifting goal posts for what victory in Afghanistan looks like, Pompeo said U.S. forces have been “successful” in achieving their original mission.

“There is a real achievement that has taken place, and we have in fact for now almost two decades greatly reduced the risk that an attack on the United States of America would emanate from Afghan soil, or for that matter from Pakistan as well,” Pompeo told The Daily Signal.

The U.S. officially ended its combat mission in Afghanistan in 2014, shifting to a so-called advise-and-assist operation that left Afghans to bear the brunt of fighting the Taliban. The move led to a sharp drop in U.S. casualties. However, U.S. troops are still in danger.

Three service members were killed recently in Afghanistan, two on Aug. 21 and a third Aug. 29, raising the total number of American casualties this year to 15, according to the Department of Defense. That number is up from 13 deaths in 2018 and 11 in 2017.

“For those who were engaged in our wars in Iraq or in Afghanistan, they took real risk and they are to forever be considered special by me and by the American people,” Pompeo said.

Today, about 14,500 U.S. troops remain deployed to Afghanistan, providing air support and other types of assistance to Afghan forces. Those U.S. forces are part of NATO’s Resolute Support mission, which comprises about 20,000 foreign soldiers.

Since last year, Zalmay Khalilzad, the U.S. special envoy for peace in Afghanistan, has met repeatedly with Taliban officials to hammer out the prospective terms of a U.S. troop withdrawal—paving the way for an ultimate cease-fire deal between the Taliban and the Afghan government.

After halting progress for months, U.S.-Taliban talks appear to be nearing a breakthrough. Khalilzad announced Monday that the U.S. and the Taliban had reached an agreement “in principle” that, if approved by President Donald Trump, would remove 5,000 U.S. troops from Afghanistan within 135 days.

Pompeo told The Daily Signal that a drawdown in Afghanistan could free up U.S. counterterrorism resources to wage a fight that is now more globally dispersed than in the period immediately following the September 2001 terror attacks.

“The question today is how do we make sure that we match today’s requirements with American resources to most effectively keep America safe,” Pompeo said.

The U.S. is engaged in two combat campaigns against Islamic terrorist groups.

The U.S. mission in Afghanistan is called Operation Freedom’s Sentinel—part of NATO’s larger Resolute Support Mission in the country.

Operation Inherent Resolve is the ongoing coalition campaign against the Islamic State, the terrorist army also known as ISIS.

According to the Department of Defense, U.S. casualties in Operation Inherent Resolve have occurred across an expansive list of countries and locations, including Bahrain, Cyprus, Egypt, Iraq, Israel, Jordan, Kuwait, Lebanon, Qatar, Saudi Arabia, Syria, Turkey, the United Arab Emirates, the Mediterranean Sea, the Persian Gulf, and the Red Sea.

“We want to get it right. We want to reduce risk,” Pompeo said, adding:

I’m very confident that our policy in the Middle East and in South Central Asia will reflect both the desire to make sure we don’t put Americans at risk unnecessarily and, second, to make sure we’re doing everything we can to reduce the risk that terror will emanate not only from Afghanistan, but from Iraq, or from Syria, or from anyplace else in the world.

The U.S. side has said a troop withdrawal must come with assurances from the Taliban that Afghanistan will not again be used as a base for terrorist groups. The Taliban, for its part, has called for a complete withdrawal of U.S. troops from the country before the beginning of cease-fire talks with the Afghan government.

Despite the peace negotiations, the Taliban has not let up its attacks—and civilians are often in the group’s crosshairs.

More civilians died in Afghanistan due to fighting in 2018 than in the previous nine years, a United Nations report found.

Underscoring the ongoing violence, while Khalilzad was announcing progress in peace talks alongside Afghan officials Monday in Kabul, the Taliban carried out a bombing in the city, killing at least 16 and wounding 119, according to news reports.

Officials of the Taliban, a fundamentalist Sunni political movement and military organization, reportedly have said that the continued attacks are intended to give it additional negotiating leverage against the U.S.

The Islamic State terror group also has expanded its presence in the country, adding to the violence, experts say.

Critics of the U.S. drawdown say the Afghan government will collapse under Taliban pressure, creating a power vacuum that could once again make Afghanistan a safe haven for terrorist groups with designs on global attacks.

In a joint statement published by the Atlantic Council on Tuesday, nine former U.S. ambassadors and envoys warned that a total U.S. withdrawal could spark a civil war.

“All of this could prove catastrophic for U.S. national security,” the former senior diplomats wrote.

Taliban officials have refused to negotiate with what they call the U.S. “puppet” government in Kabul. The militant group says it will enter into separate talks with the Afghan government in Norway only after a deal is struck for the withdrawal of U.S. forces.

With President Ashraf Ghani so far excluded from the talks, the Afghan government has treated the prospective U.S. troop withdrawal with trepidation, fearing it could pave the way for the Taliban’s return to power.

Pompeo acknowledged that the security situation in Afghanistan remains fragile, making clear that a U.S. troop withdrawal is not tantamount to a declaration of victory. Rather, the move would be a pragmatic allocation of limited resources to respond to an ongoing, global threat.

“There’s al-Qaeda not only in Afghanistan today but in many other parts of the world,” Pompeo told The Daily Signal. “So no one in the Trump administration believes that we have completely defeated al-Qaeda, or radical Islamic terrorism more broadly.”

This report was modified Sept. 5 to note that a U.S. service member died Aug. 29 in Afghanistan.