Crimes by Illegal Immigrants Widespread Across US 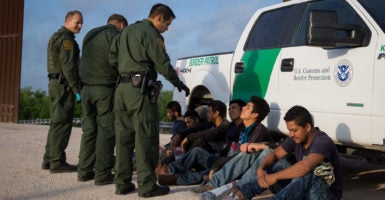 Border Patrol agents apprehend illegal immigrants shortly after they crossed the border from Mexico into the United States on March 26, 2018, in the Rio Grande Valley Sector near McAllen, Texas. (Photo: Loren Elliott/AFP/Getty Images)

The decision by a California appeals court Friday overturning the conviction of an illegal immigrant who shot and killed Kate Steinle in San Francisco in 2015 once again put the national spotlight on the serious problem of crimes committed by people in the U.S. illegally.

The appeals court in San Francisco overturned the conviction of Jose Inez Garcia-Zarate on a charge of being a felon in possession of a firearm. Garcia-Zarate was earlier found not guilty of first- and second-degree murder, involuntary manslaughter, and assault with a semi-automatic weapon.

Garcia-Zarate said he unwittingly picked up a gun, which he said was wrapped in a T-shirt, and it fired accidentally. The appeals court overturned his conviction on the firearm possession charge because it said the judge at his trial failed to give the jury the option of finding him not guilty on the theory that he only possessed the gun for a moment.

Opponents of federal efforts to enforce the immigration laws enacted by Congress repeatedly claim that illegal immigrants are “less likely” to commit crimes than U.S. citizens—and thus represent no threat to public safety.

But that’s not true when it comes to federal crimes.

In 2018, a quarter of all federal drug arrests took place in the five judicial districts along the U.S.-Mexico border. This reflects the ongoing activities of Mexican drug cartels. Last year, Mexican citizens accounted for 40% of all federal arrests.

In fact, more Mexicans than U.S. citizens were arrested on charges of committing federal crimes in 2018.

Migrants from Central American countries are also accounting for a larger share of federal arrests, going from a negligible 1% of such arrests in 1998 to 20% today.

Critics will try to downplay the importance of the Justice Department’s report by pointing out that the majority of crimes in the United States are handled by prosecutors in state and local courts.

But even there the data is shocking.

A recent report from the Texas Department of Public Safety revealed that 297,000 noncitizens had been “booked into local Texas jails between June 1, 2011 and July 31, 2019.” So these are noncitizens who allegedly committed local crimes, not immigration violations.

The report noted that a little more than two-thirds (202,000) of those booked in Texas jails were later confirmed as illegal immigrants by the federal government.

According to the Texas report, over the course of their criminal careers those illegal immigrants were charged with committing 494,000 criminal offenses.

These statistics reveal the very real danger created by sanctuary policies. In nine self-declared sanctuary states and numerous sanctuary cities and counties, officials refuse to hand over criminals who are known to be in this country illegally after they have served their state or local sentences.

This refusal to cooperate with federal immigration officials suggests that state and local officials supporting the sanctuary movement believe it’s better to let these criminals return to their communities rather than being removed from this country.

Not all of their constituents would agree.

The Texas report is careful to note that it is not claiming “foreign nationals” commit “more crimes than other groups.” Whether that is true or not—and it is certainly true when it comes to federal crimes—is irrelevant.

We know that in Texas and around the country some individuals would be alive today—and their families would not be mourning their loss—if we had a secure border and an effective interior enforcement system.

Instead of trying to obstruct enforcement of our immigration laws, state and local officials should do everything they can to help the feds reduce the very real—and all too often fatal—dangers posed by criminal illegal immigrants.

One of the worst recent examples of a state official who refuses to help federal immigration authorities carry out their duties is North Carolina Gov. Roy Cooper.

The Democratic governor recently vetoed a bill that would require local law enforcement to cooperate with federal immigration authorities. Cooper did so just days after Immigration and Customs Enforcement agents captured an illegal immigrant charged with first-degree rape and indecent liberties against a child.

The man arrested in that crime was on the loose because he had been released from custody by county officials, despite the existence of a federal detainer warrant for him.

Politicians who declare their jurisdictions to be sanctuaries for illegal immigrants who commit crimes are needlessly endangering their law-abiding citizens. That is shameful.