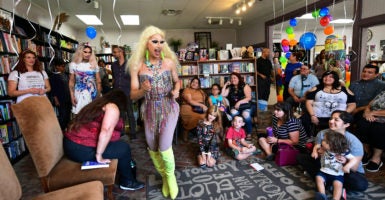 A city council in Texas has voted to stop renting out space at the local library to public organizations, essentially canceling the town’s ability to have a “Drag Queen Story Time” for children, a move hailed by pro-family advocates.

“These are people who are actually employed at adult nightclubs,” Mary Elizabeth Castle, a policy adviser for Texas Values, a nonprofit organization that promotes faith, family, and freedom, said of the drag queens.

The City Council of Leander, Texas, 22 miles northwest of Austin, voted 5-2 at its Aug. 15 meeting to stop renting out meeting rooms at the library to the public.

“We brought in $1,800 in rental fees and we spent $20,000 in security,” Leander Mayor Troy Hill said, apparently referring to the drag queen event. “That’s not good math to me.”

While “Drag Queen Story Time” didn’t end up happening in Leander due to a scheduling conflict, it came very close.

“Originally the Leander Public Library scheduled a ‘Drag Queen Story Time,’ but that event was canceled by the City Council,” James Wesolek, a communications associate for Texas Values, told The Daily Signal in an email.

“Then a so-called ‘church’ rented the library and scheduled their own ‘Drag Queen Story Hour’; however, the drag queen canceled at the last minute due to an unavoidable work conflict, and the event became a family pride festival.”

The idea of a drag queen event for children in the town of about 49,000 sparked protests, The Austin Chronicle reported.

Castle, of Texas Values, said the drag queens who often headline such events are not family-friendly or child-friendly.

“I’ve done some research and … their day job, without going further into, you know, anything personal, if you just Google them you can find out that they work at adult nightclubs,” Castle said. “And so those people shouldn’t be reading to children.”

Council member Jason Shaw, who voted to end the practice of renting out space, said that doing so was not only economically sound but a socially wise choice.

“I hate that we’re having to do this, to take it away,” Shaw said of the vote to stop renting out space.

Council member Christine Sederquist, who voted against the change, said the new policy is not inclusive.

“We already have things in place to protect our citizens and ensure costs,” Sederquist said during the debate. “There’s no reason to take away something from them.”

Castle told The Daily Signal that the content of the drag queen story hours is inappropriate, but the American Library Association is “pushing” the event.

The Daily Signal sought comment from the American Library Association, but it did not reply by publication time.

Castle said the events are woefully inappropriate for children.

“These drag queens are told to read stories, you know, about gender transitioning and about sexual orientation to young kids as young as infant age,” she said.

Leander as a whole also wasn’t too keen on the development, Castle said.

“I think the majority of the city disagrees with these events because of the cost and kind of the chaos that came with having that event,” she said. “I think the city … wants to protect their children, and for the most part they seem to be against the ‘Drag Queen Story Hours.’”

Emilie Kao, director of the Richard and Helen DeVos Center for Religion and Civil Society at The Heritage Foundation, told The Daily Signal in an email that the trend of “Drag Queen Story Hours” is doing everything to harm and nothing to help children.

“‘Drag Queen Story Hours’ are contributing to the inappropriate and early sexualization of children,” Kao said. “Parents, communities, and local libraries have the right to protect their children by refusing to host adult entertainment in spaces designed for kids.”