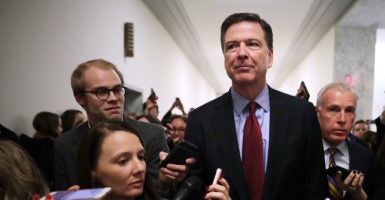 The Justice Department’s inspector general sharply criticized James Comey on Thursday, saying in a report that the former FBI director violated bureau policy in the handling of memos that he wrote after conversations with President Donald Trump.

The report details how Comey handled seven memos he wrote between Jan. 6, 2017, and April 11, 2017, following interactions he had with Trump. The Inspector General’s Office determined that four of those memos contained information classified as “Secret” or “Confidential.”

Comey, who was fired as FBI director on May 9, 2017, provided four of the memos to his personal attorneys after his ouster. He also gave screenshots of one memo to his close personal friend with instructions to provide the information to The New York Times.

Comey testified on June 8, 2017, to the Senate Intelligence Committee that he directed the friend, Daniel Richman, to share the information with the Times in order to trigger a special counsel’s investigation.

The ploy was successful. A day after Richman provided the information to the Times, Deputy Attorney General Rod Rosenstein appointed Robert Mueller special counsel to oversee the Russia investigation. By then, the Justice Department had also opened an investigation into whether Trump tried to obstruct the Russia probe.

The inspector general’s report is harsh toward Comey, saying that he “failed to live up to this responsibility” as a former FBI director, “by not safeguarding sensitive information obtained during the course of his FBI employment.”

The 83-page report also faulted Comey for leaking one of his memos in order to “create public pressure for official action.” Doing so “set a dangerous example for the over 35,000 current FBI employees—and the many thousands more former FBI employees—who similarly have access to or knowledge of non-public information,” the inspector general’s report said.

The report did clear Comey of one longstanding area of speculation. It said that investigators found no evidence that Comey provided classified information to the press. Comey noted that finding in a tweet after the report was released, calling for an apology from “those who defamed me.”

DOJ IG “found no evidence that Comey or his attorneys released any of the classified information contained in any of the memos to members of the media.” I don’t need a public apology from those who defamed me, but a quick message with a “sorry we lied about you” would be nice.