Our Changing Values Should Worry Us. But We Can Still Change Course. 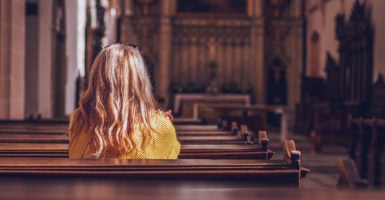 The founders of the country saw the nation's existence, its faith, and its posterity as a package deal. According to a recent poll, a new generation of young people dismisses it all. (Photo: Zbynek Pospisil)

The late historian and political philosopher Harry V. Jaffa noted the significance that the preamble to our Constitution concludes with the words “secure the Blessings of Liberty to ourselves and our Posterity.”

This is how the drafters of our Constitution saw its purpose.

Jaffa continues, saying, “a blessing is what is good in the eyes of God. It is a good whose possession … belongs properly only to those who deserve it.”

In light of this, let’s consider a just-released Wall Street Journal/NBC News poll that appeared under the headline “Americans Have Shifted Dramatically on What Values Matter Most.”

“Patriotism, religion and having children rate lower among younger generations than they did two decades ago,” the headline continues.

Among those ages 18-38, 42% cited patriotism as “very important”; less than one-third cited having children; and 30% cited “religion, belief in God.”

The founders of the country saw the nation’s existence, its faith, and its posterity as a package deal. It all went together.

Now we have a young generation, our future, that dismisses the importance of all the elements of that package. What might this tell us about where we’re headed?

The Centers for Disease Control and Prevention reported the lowest birth rate in 32 years last year. It was the fourth consecutive year with a decline in the U.S. birth rate.

And the fertility rate, the number of births per 1,000 adult women, has been dropping every year and is well below the replacement rate—the fertility rate needed to keep the population from shrinking.

Regarding marriage, over the last half-century, the percentage of U.S. adults who are married has dropped 31%.

Although Americans continue to feel free—87%, according to Gallup, are satisfied that they can freely live as they choose—a minority now sees this liberty as a blessing, in the sense that Jaffa explains the word in our Constitution. That is, “what is good in the eyes of God.”

As the sense of the importance of faith and religion diminishes, the values and behaviors that go with them—marriage and children—also diminish.

There are important practical implications on our posterity.

Fewer children means an aging population. More retirees per everyone working means more pressure on the payroll tax, each dollar of which must be distributed to more and more retirees.

And, with the collapse of family, more elderly Americans will be living alone.

If you think this picture is gloomy, the good news is nothing is inevitable. We’re still free, and we can change course.

Different discourse in the public square, policies consistent with seeing liberty as a “blessing,” can be advanced. But the starting point must be seeing something wrong with the status quo.