Nurses Union That Backs ‘Medicare for All’ Prevails at This Hospital 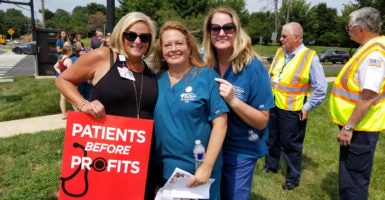 MIDDLETOWN, Pennsylvania—Not every nurse at St. Mary Medical Center supports “Medicare for All” or the political goals of Sen. Bernie Sanders, I-Vt.

But every nurse at that Bucks County hospital soon will pay dues to a labor union that has backed Sanders and government-run health care, now that a majority of their colleagues has voted to join the union.

“Medicare for All is a horrible concept that is not rooted in reality,” Vicki Zaino, a nurse manager in oncology, told The Daily Signal before the second day of voting began Friday. “The proposal would greatly burden taxpayers while destroying private insurance opportunities for people across the country.”

Other nurses who asked not to be named also expressed misgivings about being required to pay dues to Pennsylvania Association of Staff Nurses and Allied Professionals, a union that already represented more than 8,000 nurses statewide.

“I don’t want to pay union dues to an organization that is devoted to politics instead of health care,” another nurse in oncology told The Daily Signal.

Trinity Health, parent company of the hospital, had petitioned the National Labor Relations Board to hold a union election, which was conducted Thursday and Friday.

The final tally, reported by hospital officials to The Daily Signal, was 404-285 in favor of joining the union.

Amy Sollod, a registered nurse in management, expressed concern before the vote that the union would allow less room for “autonomy” while creating an unnecessary middleman between staff and management that would make it more difficult to address health care challenges.

“We are capable of resolving our own challenges and the idea that we need a union to do this I find offensive,” Sollod said. “The union will change the relationships here to the point where we will have less flexibility and dexterity to make changes in shifts when we need to. It’s just adding more bureaucracy.”

Sunny Gallagher, a nurse in the emergency department since April, said she wasn’t convinced the union is equipped to address the hospital’s needs.

“One hundred years ago, unions were absolutely necessary when we had things like child labor,” Gallagher said. “But in our specific circumstances, it will create more red tape and more bureaucracy. It’s just unnecessary to get done what we need to get done.”

Other St. Mary’s nurses told The Daily Signal before the election that the amount of time and effort the union spends on politicking would come at the expense of addressing genuine health care needs.

“I’m afraid the union will completely change the whole dynamic of the hospital,” one nurse manager said. “Nurses will be paying union dues to support policies and activities many of them don’t support.”

The website for PASNAP, as the union is known, includes a page devoted to backing Medicare for All.

“PASNAP members have voted to support Medicare for All, and have repeatedly voted to reaffirm that commitment,” the union says. “We see health care as a basic human right, not a luxury to be based on wealth or ZIP code.”

Sanders addressed PASNAP members and discussed his proposal for expanding Medicare during an April event in Plains Township in Luzerne County.

The Daily Signal sought comment from PASNAP on the election results and the fears of some nurses about political activism, but the union had not responded at publication time.

As previously reported, elected officials joined pro-union nurses for a rally near the hospital entrance earlier this month.

Donna Halpern, a cardiac clinical care nurse, was one of several nurses who spoke in favor of the union.

“I am voting yes for a union because we had troubled times in the last few years,” Halpern said in a prepared statement. “Our concerns have fallen on deaf ears and are not being addressed by our administration. Forming a union is the only way we can make any positive changes.”

The nurse-to-patient ratio and staffing level at St. Mary were major topics during the rally.

But Jim Woodward, president and CEO of Trinity Health Mid-Atlantic Region, said in an interview after the election that he found these complaints “confounding and offensive.”

“There was a unionization effort three years ago that failed, and in the past three years no one has come to us complaining about quality and staffing,” Woodward said. “Having a union here will change the relationship because it creates an iron curtain between the staff and management.”

“I am disappointed that nurses decided to cede their voice to nonclinical labor organizers,” Schwartz said. “As an organization, it is not our focus to fight unionization; it is our focus to invest in health care and health care quality.

“Our nurses and nurse leaders are not trained in labor relations, they are trained to manage clinical health care delivery,” he said.  “So this election will require some recalibration and training of our leaders to adjust to the new normal.”